Tyler Shamy
[view]
“Reginn, you are my sister no longer. As of now, you are my enemy! You've forsaken your homeland, and for that, I will run you through without hesitation! Your only value to me now is as food for the dogs! And then... Then! Then I will be the only family our dear brother has left! HahahaHAHH!”
—Ótr speaking with Reginn

Ótr is the secondary antagonnist during Book V of Fire Emblem Heroes . The prince of Niðavellir, he is the younger stepbrother of Fáfnir and older brother of Reginn, worshipping the former and fully supporting his ambitions of conquest.

Ótr was orphaned after the previous king of Niðavellir was killed, plunging the kingdom into chaos. Alongside his younger sister Reginn, the two found shelter in a remote village until they were found by Fáfnir, the new king of Niðavellir who adopted them as his new step siblings. While the siblings deeply loved their new older stepbrother, his kindness dissipated into madness when he began conquering realms. While Reginn found his actions concerning, Ótr embraced them and never questioned it.

When Fáfnir began his invasion of Askr, Reginn was sent to lead the first wave. When she failed to return, Ótr was initially concerned, but Fáfnir was not. Ótr lead the next wave and discovered that Reginn had allied with the Askran forces with the intent of stopping their stepbrother. The news caused Ótr to disown Reginn and delight in the thought of having Fáfnir's attention all to himself. Though Ótr attacked Reginn with the intent of killing her, he is repelled by the Askr forces and retreated.

Later on, Ótr is handed over both Kiran and Gramr by Nótt, having manipulated her by promising to marry her.

Ótr is a devout follower under his older brother, Fáfnir. His devotion to his brother goes as far as to be considered worship and is in full support of Fáfnir's ambitions of conquest. At times however he becomes concerned with Fafnir's mental state especially after witnessing Fafnir's headaches and hearing him say that their sister means nothing to him, but quickly chooses to side with his older brother, deeming her a traitor. Ótr is also the one behind the Askr invasion, being the one to suggest the idea to Fáfnir in the first place.

Ótr is also very manipulative, using Nótt's love for him in order to trick her into handing over the weapon Gramr and capturing Kiran. He has no romantic feelings for Nótt whatsoever and considers her "a fool", hoping that she and Dagr will kill each other to make conquering Jötunheimr easier in the future.

Kingsbrother
Stepbrother of Niðavellir's king, Fáfnir. Worships his brother and fully supports his ambitions of conquest.

In Norse Mythology, Otr along with Reginn were the younger brothers of Fáfnir who could change into an otter and greedily eat fish. He was accidentally slain by Loki who wanted to keep his pelt. 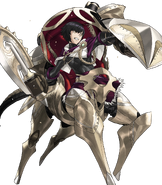 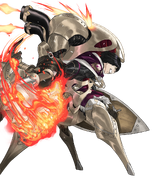 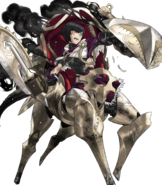 Ótr on the key art for Book V of Heroes. 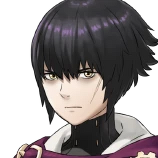 Ótr's Sprite from Heroes.
Add a photo to this gallery