The ☆Seiken Salia (☆聖剣サリア Seiken Saria, lit. Holy Sword Salia; fan translated as ☆Holy Sword of Salia, ☆Salia Calibur, or ☆Agneyastra) is a divine Sword that appears exclusively in TearRing Saga: Utna Heroes Saga. The holy sword of Salia, it is only usable by Holmes. Alongside its sacred counterparts, it is a weapon that is crucial to piercing the scales of Gerxel, as it can negate the effect of ☆Dragon Scale.

When equipped, the sword imbues resistance to Breath attacks, cutting the damage they do by half. Being one of four holy swords of Lieberia, ☆Seiken Salia can only be activated and worn upon fusing with its respective ring (in this case, the Ring of Salia).

The name used in the fan translation, Agnēyāstra (अग्नेयास्त्र), is a fiery arrow used by the Hindu fire-god Agni. Its flames are said to be inextinguishable through normal means. 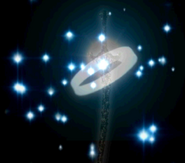 As portrayed in this animation still, ☆Seiken Salia is initially encased in a thick layer of rust, and can only be 'awakened' when it comes into contact with the Ring of Salia.