View source
watch 25:59
'Fire Emblem: Path of Radiance' - Chapter 6
Do you like this video?
Play Sound 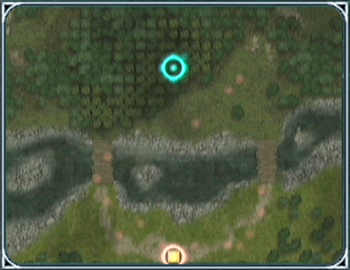 Chapter script
[view]
“The continent of Tellius, blessed by the goddess. To the northwest lies the land of Crimea, home of the Greil Mercenaries. Without warning, Crimea's eastern neighbor, the kingdom of Daein, launches an attack on Crimea's capital city of Melior. Ike leads a handful of mercenaries to Melior to confirm Soren's news of the attack. En route, they happen upon a young woman, unconscious but unharmed. Fearing for her safety, they take her to their stronghold. When she awakens, the woman gives her name as Elincia and lays claim to the title of princess of Crimea. She relates the sad tale of her flight from Crimea and of her parents' murder at the hands of Ashnard, king of Daein. The Greil Mercenaries answer Princess Elincia's plea for help and agree to escort her to the kingdom of Gallia. Located to the southwest of Crimea, Gallia is home to the laguz, a race quite unlike Ike and his fellow beorc. Crimea and Gallia have long struggled to overcome their differences. In recent years, the two kingdoms have done much to ease the prejudice between the laguz and beorc factions. Their combined efforts have forged a bond of trust and friendship that may yet overcome years of intolerance. Ike and company escape the Daein army, abandoning their longtime base. From there, they begin the long march toward Gallia. Their task clear and their destination far, they slip into an ocean of trees.”
—Opening Narration

A Brief Diversion is Chapter 6 of Fire Emblem: Path of Radiance. The boss and the two soldiers next to him cannot move, however they do have ranged weapons. The chapter starts with Ike and company trying to escape into Gallia. Greil, Shinon, and Gatrie break off from everyone else to distract the enemy while the group led by Ike will escape into Gallia. However, more enemies are in Ike's path than were expected, and there is no turning back. Princess Elincia offers to fight, but Ike will not allow it. Rolf and Mist decide to sneak Elincia around while Ike's group cuts through. Ike's group decide to launch a sneak attack on the enemies, and decide to make a break for Gallia. The chapter ends with Ike successfully getting into Gallia and wondering where his father, Shinon, and Gatrie have gone.

Mend is awarded upon completion if Rhys survives.