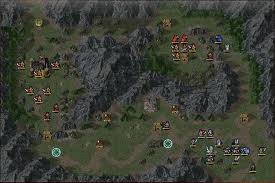 Lena and Julian (at the beginning)
Navarre (Speak with Caeda)

Chapter script
[view]
“When journeying in from the borderlands, one particular peril would spring to mind: the Samsooth Mountains, whose gashing peaks rose up and divided the peninsula. Since before anyone could remember, the mountains had belonged to bandits, blights on the land whose acts of plunder, kidnapping, and arson knew no bounds. Out of fear, their victims gave these peaks another name: the Ghoul's Teeth; while the bandits who ruled atop the Teeth's craggy crowns took a name as well: the Samsooth Sires, or Soothsires...”
—Opening Narration

A Brush in the Teeth is Chapter 3 of Fire Emblem: Shadow Dragon. The level begins when the thief Julian is leading Lena out of the mountains, with Navarre and his bandits in pursuit. Lena wishes to go back for her Mend staff, but Julian does not comply, stating he did not betray his group to be zapped away by a Warp while Lena went back to get her Mend staff. The party proceeds to aid their escape and the two join the army, although strangely they are under player control at the level's start.

This level is particularly annoying due to the inexperience of your team getting in the way. Be sure to split your team into two groups: one to the west, and one to the north. The north team, led by Caeda (she can recruit Navarre), should also contain a Cavalier and some other units that can clear out the fighters and thieves. However, Ogma, Barst, Wrys (for healing), and some other stronger units should go with Marth to the west to hold off the fighters and hunters. However, make sure Marth goes to the village to receive a Devil Axe before he goes to fend them off.

To recruit Navarre without killing Caeda, be sure to keep Lena and Julian away from the enemies so they do not die. As for Navarre, keep Caeda out of the hunter's range so he does not shoot her down. However, once Navarre gets into her range (assuming there are no fighters to attack her), send her over to recruit him, and let his blade cause the hunter's death. If you are playing the remake, and you want to access the side-quests, be sure to kill off any units you do not want to use now. If you do not, then just send your northern units to kill off the fighters and thieves.

In the west, you will want to form a wall near the mountains and homes to get avoid bonuses. Also, be sure there is at least one Vulnerary in your western group's possession. Forming a wall allows your units to crowd together and not be ganged up on. After one of turn of walling, let your opponents squirm to death (kill them efficiently), and then proceed to the castle-like structure. If any of your units are wounded, let them use a vulnerary, be healed by Wrys, or rest at the fort south of the seize point.

In the north, after recruiting Navarre and killing the rabble of fighters and thieves, proceed through the west, narrow passage, though Caeda can just fly over to come up behind the back. Select the fastest units in your entire party to fight Hyman, the boss; be sure those units cannot be doubled. Navarre or Ogma with the killing edge are particularly useful here. After a few turns of alternating and healing, Hyman should fall and drop Lena's Mend staff. Let Marth seize the "castle" to obtain the 15000 gold the Soothsires left behind.

A Brush in the Teeth as appeared in Fire Emblem: Shadow Dragon and the Blade of Light.