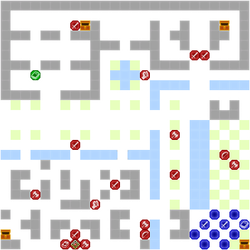 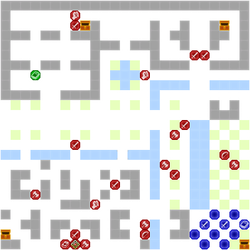 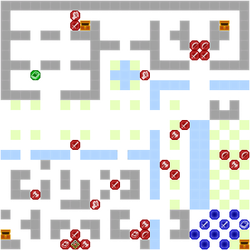 Chapter script
[view]
“The church has asked Constance to retrieve a mysterious Relic from Duke Gerth, the Empire's Ministry of Foreign Affairs. You and Yuri accompany her to the negotiations.”
—Opening narration

There are two sets of enemies: Agarthans and Thieves. If the thieves reach Duke Gerth, they will each transform into a Demonic Beast.

It’s not recommended to attempt this paralogue until late in Part One (February). Your units should all be above level 20 and in Advanced or Special classes so they have the necessary strength, speed, and defense to handle the enemies.

Your starting position is the biggest issue with Duke Gerth very far away. He can handle a few enemies so don’t fret if he starts fighting. Immediately use the Stride gambit on your tank and high movement and avoid personnel. Use the Warp ability to warp your tank to fight the two axe and sword wielders in the middle part of the map (the section where there is a Thicket space every other middle spot). Kill or use gambits on the mage, archer, and axe wielder closest to your group. Move the rest of your team east around the edifice towards Gerth and the boss. Ignore the two archers and axe wielder to the north for now.

Be aware that once Myson is defeated a large amount of reinforcements will appear around the edges of the map. It’s important to make sure Gerth is safe before you defeat Myson to prevent Gerth from being killed. Keep your Restore unit near your group even using items like the March Ring or having your Dancer give them another turn to keep them within range of your personnel. A few of the enemies have gambits and rather than lose one because they’re immobilized, use your Restore ability and get them back in the fight.

At the end of round two, Gerth will kill an enemy thief with ease and the enemy will turn into a Demonic Beast. Myson and his group may also start approaching your team and Gerth at the end of the round also. If you want to delay the reinforcements, consider using gambits on Myson to immobilize him and hold off on defeating him.

During the enemy turn after Myson is defeated, the reinforcements will move in. This is where most players get tripped up due to the sheer amount of enemies you’re dealing with. Make sure Gerth is across the bridges (you can use Rescue or movement combat arts to bring him closer) then uses the three bridges as bottlenecks to whittle down the number of enemies you’re dealing with. This is where long-range mages and fliers with Canto can come in handy as you’ll be able to safely eliminate enemies from a distance. Also, the Demonic Beasts will be unable to cross the bridges due to their size, which means you can wait to deal with them until all the approaching enemies are eliminated. If some your personnel aren’t strong enough to bottleneck the bridges, use the Impregnable Wall gambit for a few turns until you have cleared out the enemies.  Abilities like Silence come in handy here as well and don’t be afraid to use a Dancer and double up on some these tactics during a single turn. Once you’ve eliminated the approaching enemies, you’re safe to clear out the map at your leisure.