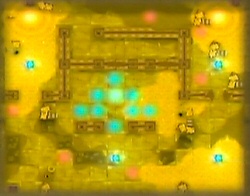 Meg (Read the Info conversation in the base)

A Distant Voice (遠く呼ぶ声 Tōku yobu koe) is Chapter 1-4 of Fire Emblem: Radiant Dawn. This is the first chapter in the game that has 2 bosses.

For all directions start the cursor at the bottom left end of the map.

You will get a new character before this chapter: Meg, an Armoured Sword. However, Meg is very fragile early on, so if you want to use her throughout the whole game, you will have to be careful about training her.

Before this chapter, you will have your first chance to make support pairings. Nolan with Edward is one of the most effective pairs in the game, as both are front-line beasts, and with Nolan's earth affinity, Edward will get more avoid as well. Aran's best partner is probably Laura, as it builds quickly and gets both of them decent evade. Leonardo also has a water affinity, so he could give and get good bonuses with Aran; however, he is not that great of a unit, and probably will not be used later on. Leave Micaiah's A support with Sothe intact, as both are always together, and it gives good bonuses as well.

In this chapter, you will be up against entirely Beast Tribe Laguz, Tigers and Cats. The tigers do extremely high damage, so handle them with extreme caution, and be careful with your less durable units. Tigers can probably take Micaiah and Laura in one hit, and Ilyana in two, and possibly Edward in two as well.

Right off the bat, a Tiger will come around and start breaking the breakable wall above you, so keep Edward or Aran or someone there to deal with it (Nolan is best due to higher HP and Attack power, position before the broken wall and have your other ranged units support him when needed). You could also deal with a ranged unit; it is possible that Ilyana has enough speed to double it. Also, there is a tiger you can snipe near your starting location, so you should probably take care of it like that rather than in melee as well.

The hidden treasures are found in all of the treasure piles, except for the one in the upper-left hand corner.

Make sure you get the hidden Beastfoe scroll in the upper-left portion of the map, as it will be extremely useful later on in the game, in Part 3. Also, in the shop before the battle, Aimee is offering a Beast Killer knife for Sothe, which will allow him to make short work of the Laguz in this chapter, and later on as well. Make sure you buy it.

Later on in the chapter in harder difficulties, more laguz will spawn in the top portion of the map. You should have two or so units there to deal with them, probably one of your melee fighters and Ilyana or Micaiah so that both can attack in one turn while allowing only one laguz to attack you at a time.