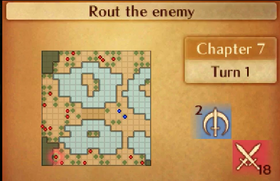 Chapter script
[view]
“Corrin's love for the Nohrian siblings prevails, and a path is chosen. They return to the castle to tell King Garon what took place.”
—Opening Narration

A Dragon's Decree (聞こえざる啓示, Kikoezaru Keiji An Inaudible Revelation in the Japanese version) is Chapter 7 of Fire Emblem Fates in the Conquest Version. This chapter takes place in the Woods of the Forlorn.

A script for the chapter can be found here

Defeat all 16 Faceless to complete the chapter.

The player is only allowed two units, Corrin and their servant character being the two most likely for the player to have at this point since it should be impossible for the player to be able to afford bonus units. The player should focus on taking advantage of the servant characters personal skill and Demoiselle/Gentilhomme to let Corrin take down the Faceless in hopefully one round used to lure the faceless in. The middle path or top path would be advisable, and the next turn should be used to heal and head back to start, or possibly go further on the offensive; do recognize, however, that this makes building support more difficult. On turn 3, Silas and Elise will appear, providing extra firepower and healing services to the player. One turn later, Arthur and Effie will appear to provide even more power.

The player may have the easiest time on this map taking advantage of the pseudo-choke points on the map, with the easiest one to obtain being the one that the boss is located in due to lack of enemy units on that path and even the ones that are there moving in on the player early on. Once the chokepoint is secure, taking advantage of the servant character and Elise's personal skills and Effie/Dragonstone or Nohrian Blade Avatar's bulkiness will let the rest of the Faceless on the map walk into a death trap.

Silas is a fantastic unit on this map, as it is simple to get MU below half HP within the first few turns on higher difficulties. When this happens, Silas gets a +6/-3 damage modifier that can be stacked with Lily's Poise to get Silas to effectively work as a better Effie, with better movement and speed. Getting a C rank between Silas and Corrin means that the next chapters may be eased up a fair bit with a 7 Movement, +8/-5 damage unit that has access to both swords and lances.