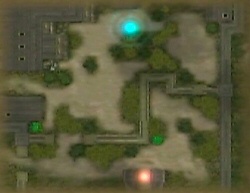 Ilyana (Gained at beginning of Chapter)
Aran (Appears as an enemy reinforcement, talk to him with Laura)

The next two don't count in Easy Mode:

All Coordinates are starting from the bottom left corner

This coordinates are based on the bottom-left corner of the map and moving the cursor the indicated number of squares.

You'll have a few more units to protect in this chapter, with two Partner units as well as the fragile likes of Ilyana joining your ranks, so be careful around some of the more powerful enemy units. Kurth is very durable, so he shouldn't be too much of a problem, but Aimee isn't so strong, so keep them both away from combat. Use Micaiah's Direct command and the Target option to have them follow your units as you advance up the map, while keeping them a few spaces back to keep them safe from ranged attacks.

If Ilyana has transfer data from Path of Radiance and capped Speed and Magic in the previous game, she will turn into an ENORMOUS boon in this chapter.

There is a fighter to the right of your starting location - have Edward defeat him so that you don't end up with him creeping up on you and finding yourself somewhat surrounded.

Another option is to use Kurth as a wall. Start by sending Edward right to defeat that fighter and use Sothe to rescue Aimee. Next, use Micaiah's Direct to use Kurth to bottleneck one of the tree spaces and use Nolan for the other. There are a total of three spaces the enemies can charge you on: the far left one, the middle one, and one through the reeds. (Or, assumine the upper-left most tile of the map is 0,0, the three spaces are 3,5 ; 5,5 ; 7,5). Of notice are the far left and middle ones, as they run a genuine risk of attack, but due to the movement cost of Reeds, the third space is relatively safe. Use Kurth to blockade the left side. He has 55 HP, and 15 defense, a respectable amount at this point in the game. Thus, by rescuing Aimee with a unit that can (such as Sothe), you can have Kurth block one of the two entryways for enemies near the beginning of the stage using Micaiah's Target command. He can also assist in recruiting Aran, as, due to his inability to counter, Aran does not run the risk of accidentally dying to your units. This, however, is more prominent in Normal and Hard mode. Due to the AI, units are much more likely to attack Kurth due to his lack of a weapon. As such, you can easily snipe units from behind Kurth with Micaiah, Ilyana, and Leonardo. If you do this, wait until you are sure you can handle the influx of enemies or no more enemies rush you, and begin moving downward.

Another thing to note is this game's Steal mechanics. Unlike previous titles, weapons CAN be stolen in this game! To make maximum use of Sothe, you will have to have someone else take Aimee; Nolan or your newly-gained Aran are good candidates. Of note are three enemies: One near the lower-right with a Javelin and Steel Lance, one near the lower-left with a Hand Axe and Steel Axe, and the Boss with a Discipline scroll. Manipulation of the AI is key: enemies will change weapons based on who they're attacking. Thus, if you wish to steal their ranged weapon, use Aran with an Iron Lance or Edward with his Iron/Steel sword lure them, and use Leonardo (do NOT use 1-2 weapons!) to lure them if you wish to steal their close-range weapon. A possible strategy for this is to open the door at the right, bottleneck it with Kurth, leap in with Sothe when the targeted enemy attacks Kurth (as he is still essentially invincible, being a Jeigan) and steal the weapon.

When using Kurth as a meatshield, be INSANELY careful of enemy reinforcements, as doing this requires an overall defensive strategy, thus, do NOT lure the boss over too early!

On turn two, some enemy soldiers will appear, one of which is Aran, who is a recruitable character by having Laura talk to him. In Easy mode, he appears right where you start, so don't move her too far from her starting location to make it easier to recruit him. In Normal mode, on the other hand, he'll appear on tile (1,10), so you'll have to have Laura move down a little bit more to recruit him.

The boss of this chapter once again falls effortlessly to Micaiah's insanely powerful Thani tome. Be careful to steal the Discipline tome from the boss before you do, however, as it'll be very useful for raising weapon levels on characters with multiple weapons, especially Micaiah later on.

If you're doing Normal or Hard mode, you'll have to get your characters to escape. Make sure that you get them all to, and not just Micaiah, as it'll net more bonus exp. To have the Partner units escape, choose the Direct command on Micaiah, and Target the flashing tile.