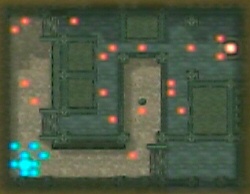 Chapter script
[view]
“The Liberation Army's sweeping victory seems to signal a turn in the war for Daein. However, General Jarod uses his superior numbers to harry the group and threaten their fragile momentum. Begnion has fortified its army with weapons and supplies bought with funds stolen from Daein. Begnion has also purchased the swords of a vast number of mercenaries from these same stolen funds. The Liberation Army does not want for willing fighters of its own. However, most are old men and inexperienced boys whose passion far outstrips their skill. The Liberation Army has no choice: it must bolster its ranks if it is to meet Begnion on equal terms. Its only hope lies locked in Begnion's prison camps, where Daein's former soldiers await their rescue.”
—Opening Narration

The two units above you and right of you will charge you immediately, so use your magic users or any competent unit against them, and use Volug only if overwhelmed (due to his massive EXP stealing). On turn 2, Tormod, Vika, and Muarim will appear at the lower-right; let them defeat the enemies in their vicinity, then talk to Sothe.

On Easy mode, one can easily blitzkrieg through the map with all their units.

On Normal and up, however, it's recommended to wait until the storm dies down. At turn 7, if one rushed, one can easily be harmed by a hammer-and-anvil strategy, so fight a decently defensive battle, unless using promoted units (which is not recommended, though, if one wishes to, they can rush through the level, but gain minimal EXP due to the general nature of pre-promotes). After turn 7, at turn 9, the reinforcements will charge you, so take them out.

Next, one can begin to slowly move upward. Send two units all the way north, (Edward preferably as one, as there are primarily axe-users) and defeat the northern-most enemies guarding the doorway. Next, slowly defeat enemies across the stairwell and bridge, and after clearing all enemies, send Sothe or a Door Key holder to open the two doors at their left, netting them a good amount of BEXP. The next Armor Axe guarding the cell will not move, but be wary of a Longbowman to the right of him. Defeat him, move through. Note the two archers flanking the boss will not move, so defeat them quickly, then tear through the mages with units of your choice and use Sothe to free the remaining prisoners.

Finally, the reason one should forego the 500/250 extra BEXP in this chapter: the boss is immensely easy to abuse. Unless one does not wish to, they can easily let a unit such as Sothe soak up the weapon uses (possibly training Micaiah and Laura at the same time using a Sacrifice-Heal chain), then rain smaller hits upon him and watch him regain HP slowly. He also has a steal-able vulnerary.