A Glimpse in Time 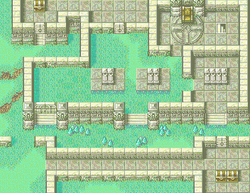 Chapter script
[view]
“Now, at long last, they've finally reached the Dragon's Gate. Hector gains a brief respite before the decisive battle. Shortly thereafter, he notice something... Ninian has gone missing. There! Her pale figure vanishes into the dark woods, her gait is unsteady, as though she were possessed. Hector quickly gives chase.”
—Opening Narration

A Glimpse in Time is Chapter 19xx (also known as Chapter 19x Part 2) of Fire Emblem: The Blazing Blade. It is unlocked by getting Nils up to Level 7 while playing Lyn's story and killing Kishuna in Chapter 19x: Imprisoner of Magic. It is only available in Hector's mode.

This chapter contains Fog of War. Because of both this issue and the presence of three chests (which contain an Eclipse tome, Dragonshield, and Talisman), it is a good idea to take Matthew. In particular, putting Matthew near the passageway so he can get to the chests more quickly is suggested. It is recommended to put a magic-user or strong physical attacker in front of him, as a knight is stationed in front of the passageway. Beware of enemy thieves, as they will attempt to get to the chests first, and have 20 speed (so that you cannot steal items back unless Matthew also has 20 speed).

Some enemies are holding poison weapons, so be prepared to heal when necessary. Teodor holds an Eclipse tome, which will take away half of a character's HP if it hits, so be careful. Fortunately, Eclipse has a low hit rate. Use a melee attacker to kill him.

If one so desires, Teodor can be a fantastic boss to grind levels on, owing both in part his status as a level 17 Druid and Nosferatu tome. Just be careful that your units have enough HP/Resistance to not be taken out in one hit, and/or enough Luck to not be critted.

Ninian heads off into the woods alone, and Eliwood and his group follow her to some ruins. When Ninian arrives at the ruins, she has a flashback to a man, dressed in shaman's robes, leaving his two children there so that he can rescue his wife, Aenir, from kidnappers. The appearances of those involved and the dialogue at the end of the chapter heavily implies that the man is a younger Nergal and the children are Ninian and Nils.

Eliwood and his group do not find Ninian when they come to the ruins, but rather a druid named Teodor. He speaks to them about the price of power through Elder Magic, namely that in order to fully channel the darkness, one must "erase" oneself and become but a vessel to receive the darkness; "if your disposition is weak, the dark will overwhelm you", and often, you will forget even why you sought power in the first place. This is how, according to Teodor, Bramimond gained "the power to best dragons". Eliwood asks what sort of power would be worth that price, and Teodor replies that he believes everyone has felt the desire to have something at any cost. He then reveals himself to be the Shrike of the Black Fang and orders his forces to attack.

After Teodor is slain, Lyn finds Ninian inside the ruins, staring at a painting of a man and a dragon. Ninian retrieved, Eliwood's group leaves for the Dragon's Gate; in their wake, Nergal teleports to the ruins. He expresses confusion as to where he has come and why, then recalls that he used the ruins as his study during the Scouring, and that he left "something valuable" there. Upon recalling this, he suffers a splitting headache. After this headache, he dismisses the memory with "[it] must not be worth much if I never bothered returning for it," declares that "I have power now. Nothing else matters," and teleports away. When he appears here he is a green color unit, as opposed to his common red enemy appearance.

If this chapter and all three Kishuna chapters are completed, a CG matching the description of the painting Ninian was looking at is used as the background for the FIN screen upon completing the game (instead of the CG of Zephiel's evil smile). The man and the ice dragon in the CG are implied to be Nergal and his wife. In addition, Nergal's death quote is expanded, and Nils cries upon Nergal's death, although he doesn't know why.

It should be noted that "Aenir" in the above was mistranslated as "Quintessence" in the English localization [1]; the translators probably misread "Aenir" as "Aegir" (the Japanese version's name for "Quintessence")

In addition, when (presumably) Nergal is talking to his children in Ninian's flashback, one of his lines is approximately the following: "Daddy has to go and get Aenir... Mommy." This is rather ambiguously translated in the English version as "Daddy has to go to Aenir...I'm going to get Mommy", making it seem to some readers as though Aenir is a place.