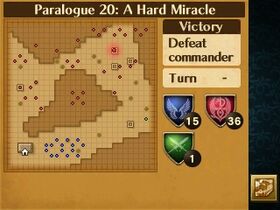 Emmeryn (End of chapter, if she survived this chapter)

Chapter script
[view]
“The Grimleal have kidnapped villagers to offer up as sacrifices to Grima, the Fell Dragon. En route, Chrom and his allies are reunited with Chrom's sister Emmeryn, whom Chrom had thought dead. However, she is no longer the sister Chrom remembers...”
—Opening Narration

A Hard Miracle (The Happy Girl in the Japanese version) is Paralogue 20 of Fire Emblem Awakening. This chapter takes place in the Mountain Village. This Paralogue is only available via SpotPass.

The map has a total of 36 enemy units and 1 ally unit (Emmeryn). The enemy units consist of 6 Assassin units, 14 Dark Flier units, 9 Dark Knight units and 7 Sorcerer units, including Ardri who is also a Sorcerer. All melee units are equipped with Silver weapons, the Dark Fliers, Dark Knights and Sorcerers also have B-rank tomes equipped (Some Sorcerers have C-rank tomes equipped). Ardri carries a Talisman which he will drop once he is defeated.

If Emmeryn survives the chapter, she will join the army. If Emmeryn dies in this chapter, it will not trigger a Game Over.

With Emmeryn across the map, you will need to rescue her as soon as possible if you want to recruit her. It is best to use a Rescue staff to quickly bring her to your ranks. During this, Emmeryn will not move or be able to defend herself. Unfortunately, numerous Dark Fliers are near so you will need to eliminate these enemies as soon as possible or wall off Emmeryn from these forces. Once they have been dealt with, you can send a small force out to defeat Ardri as soon as possible, but Emmeryn will need a few units to stick near her so she will not get ambushed by the enemy. Alternatively you can forcibly warp Emmeryn using a Rescue staff. If you did not bring one onto this map, the village in the west will provide one if someone visits it. It is possible to use a Dark Mage/Sorcerer to quickly snipe Ardri using Mire, ending the chapter, however this strategy is less viable on higher difficulties.