A Man for Flowers

A Man for Flowers 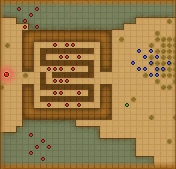 Chapter script
[view]
“Worry not! I'll mop up the lot of them and be back in time for tea... I'll meet you in town once I've sorted those pesky bandits. Perhaps then we could discuss my...reward. Ho ho!”
—Inigo saving a village girl

A Man for Flowers (The Man who suits Flowers in the Japanese version) is Paralogue 6 of Fire Emblem Awakening and Inigo's paralogue. This chapter takes place in the Great Gate.

Inigo will be recruited and controllable once Chrom or Olivia speaks to him. After the chapter is completed, Inigo will receive items if he defeated some of the enemies. Inigo must defeat at least 5 enemies to obtain all items.

Inigo can be one of the easiest or hardest future children to have to survive the chapter. If you plan to not use Inigo on this chapter, have Chrom or Olivia talk to him and move him into the forest as the enemy prioritizes units within their range first.

If your units are strong enough to deal with the enemies, have him pair up with someone with high Speed so he is able to double enemies if possible. Be wary of the enemy mages in the area as if the parents are not strong enough, he may take too much damage or die if they manage to hit him often. Once all the enemies in the middle have been dealt with, kill Jamil to finish the chapter. If you want to get the items, have Inigo be the lead unit in the Pair Up, as even if the partner kills the enemy, it will still count towards the rewards, but he needs to do some damage first.

Otherwise, the player must go against Generals, Assassins, and Sorcerers inside the structure, with Dark Fliers and Griffon Riders flying above water on the outside. Inigo can defeat the Assassins and Dark Fliers if the player needs easy kills, however both can prove to be a problem if the player does not provide Inigo with enough Speed; however, as most players will place Galeforce on him, the training Olivia does beforehand should provide him with enough to not be doubled, even if his father doesn't have high speed.

Many of the enemies are armed with ranged weapons, and because of the odd interior walls, the enemy can easily pick away at close range units without worry. Sending in ranged units of your own can help a lot, but one needs to be wary if sending in bow wielders since they can be targeted at close range without being able to counterattack. Sorcerers of your own can prove to be valuable due to their equal defensive stats and ability to heal damage via Nosferatu, however they will need to be cautious of enemy Sorcerers who have the Tomebreaker skill, unless your own Sorcerers have the skill themselves to cancel it out.