Fire Emblem Wiki
Register
Don't have an account?
Sign In
Advertisement
in: Stubs, New Mystery of the Emblem chapters

Chapter script
[view]
“The unexpected truth revealed by Xane took Marth by surprise. Tiki was the daughter of the Divine Dragon King, Naga, and was sleeping in the temple because the king so willed. The Divine Dragon King’s fear of Tiki’s power was that of a loving parent. Were Tiki to awaken, her dreadful hidden power would eventually destroy the world… So thought the king. However, Bantu, the king’s servant, changed his mind after centuries of watching Tiki, waking her from her slumber and whisking her away. That’s why Tiki’s memories are just the ten years she lived as a human… “Poor Tiki…” Marth was too bewildered to think.”
—Opening Narration, New Mystery of the Emblem
“The surprising truth from Chainy was a shock to Marth. Chiki was created as the daughter of the Divine Dragon King, Narga, and slept in the temple because of the king's will. The king's fear of Chiki's power was that of a loving father's. If Chiki was to awaken, her tremendous power would eventually cause the destruction of the world... That is what the Divine Dragon King feared. However, Banutu, the king's servant, became attached to Chiki after watching over her for a period of hundreds of years. He awoke her from her sleep, and took her away. So Chiki only had 10 human years' worth of memory..."That is so sad, Chiki..." Marth was too bewildered to think.”
—Opening Narration, Mystery of the Emblem

A Mystery Revealed is Chapter 14 of Fire Emblem: Mystery of the Emblem and its remake.

There is a secret shop selling Dragonstones in center of the U-shaped lake, specifically on the cracked ice (original) or the land tile in the middle of the frozen lake (remake). Warp is the only way to get there, which can be obtained by killing a Thief holding it outside the temple. Caution must be taken to not warp Marth to the Secret Shop's location unless you have a Rescue staff to get him back out.

Slowly bait the enemy units as you approach into the shrine. Unlike the Thieves in the other chapters, they can initiate an attack against your units.

The Starsphere shards can be combined here provided all 12 of them are present. After obtaining the Starsphere, Tiki can be recruited from the right room by talking to her with Marth.

After placing Marth on the designated square, beware that new rooms will be opened and enemy reinforcements are going to come from the south. 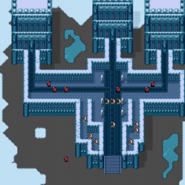 Chapter 14 map from Fire Emblem: Mystery of the Emblem. 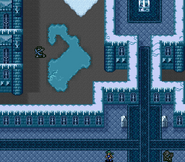 The Secret Shop's location in Mystery of the Emblem

Secret Shop's location in New Mystery of the Emblem