A Shot from the Dark

A Shot from the Dark 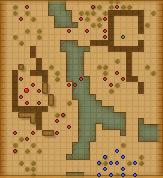 Chapter script
[view]
“Ezra: All alone are you, lamb? Off searching for dear old mum? How very sweet. But the world's a dangerous place, my dear, full of wolves waitin' to snatch you up.
Noire: Um...Th-thank you for the warning, sir, b-but...
Ezra: That's no warning, lamb. I'm a wolf, and you've been snatched! Now come quietly. Scars tend to lower the sales price, and we wouldn't want that...”
—Noire becomes a slave to Ezra

A Shot from the Dark (Hidden Arrow in the Japanese version) is Paralogue 15 of Fire Emblem Awakening and is Noire's paralogue. This chapter takes place in Kidnapper's Keep.

This chapter will be unlocked after Tharja has achieved an S-support with someone and Chapter 13 has been completed.

Unlike the other child paralogues, Noire is automatically recruited at Turn 2, instead of using Chrom or their fixed parents to get them recruited.

This paralogue can be pretty easy if you have basic Fire Emblem knowledge when it comes to bonus damage. It may seem like Noire is going to die, but don't worry: as long as the parents were trained up well, it should be a piece of cake.

At the start of Turn 2, Noire will obtain a steel bow. This is good news for Noire, because now, she can gain experience from taking out the flier units outside of the walls. To ensure she can have proper grinding, have one of your Generals pair up with a Paladin. Then, at the entrance of "Noire's fort", separate the General in front of the entrance. This way, Noire will have proper protection. Your other units can now head for Ezra, keeping flier units out of the bow users ranges.

The majority of the enemies near Noire are mainly Falcon Knights and Griffon Riders. Some of them are within range of her after Turn 2, and all of them will not move unless one of your units are within range or are attacked by one of your units. The enemies on your left are mostly Paladins and Bow Knights, which shouldn't be much of a threat if your units are properly leveled. It is important to know that the light colored and dark colored walls are different. Dark colored walls are just walls and thus, your units cannot pass them, including flying ones. Light ones are rubble, which flying units can go through.