View source
watch 34:07
'Fire Emblem: Path of Radiance' - Chapter 12
Do you like this video?
Play Sound 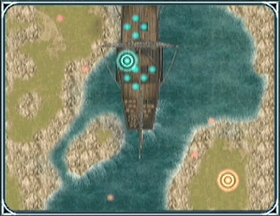 Sothe (base conversation Boy, say yes to watching over him)
Jill (NPC, if she survived in Blood Runs Red, talk to with Ike)

Chapter script
[view]
“Having narrowly escaped Daein's grasp, the Greil Mercenaries are pleased to feel the ocean beneath their feet as they set sail. According to Captain Nasir, the voyage to Begnion will take roughly two months. Blessed with temperate weather, the ship's journey southward is smooth and steady. As it passes the midpoint of its trip, the ship sets a course along the coastline and begins to head east. These seas belong to Phoenicis and Kilvas, the kingdoms of the bird tribes. Both nations prey on human vessels for supplies and wealth, and their flying corsairs are feared across the seas. Additionally, the southern portion of the continent contains the realm of the dragon tribe: the monarchy of Goldoa. This country has remained isolated since its founding centuries past, preserving its closed culture behind a veil of mystery. It is these laguz-controlled waters that Ike and company must now cross.”
—Opening Narration

A Strange Land is Chapter 12 of Fire Emblem: Path of Radiance. In this chapter it is good to have Rolf, Ike with laguzslayer, and most of your laguz.

This chapter can be fairly difficult because all of the enemy units are raven laguz, who can kill your weaker units if you are too careless. Yet, this chapter can be really good for training your weaker units if you are careful enough, Rolf in particular. The way to complete this chapter is to form a wall with your stronger units right in front of the stairs, and let the opponent come to you. This will allow Rhys or Mist to heal your units quickly without dismantling the entire barrier. Make sure Ike is at the left set of stairs so Jill can reach him and speak with him.

After a few turns, Seeker, the boss, will start moving towards the ship. Make sure you have killed the other Ravens to get the goodies they drop. When Seeker reaches the ship, be sure to wear down his health with your stronger units, and finish him off with any unit that can that you plan to use.