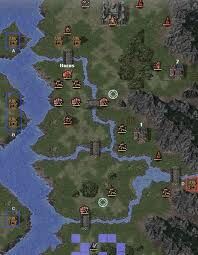 Chapter script
[view]
“After taking back the palace, the League rode across Akaneia, freeing the greater part of the kingdom as they went- all except the west. A landed knight there named Horace, who had betrayed Akaneia, to join Doluna, continued to stubbornly hold out against Marth's forces. Nyna could not fathom why such a fiercely loyal knight would turn to treachery, but with her other knights calling for Horace's blood, she had no choice but to give in and ask Marth to bring the traitor to justice.”
—Opening Narration

A Traitor's Worth is Chapter 12x of Fire Emblem: Shadow Dragon.

To gain access to this chapter, complete Chapter 12: The Ageless Palace with 15 units or less.

Like most of the extra chapters you can get to, this one is really easy. Feel free to bring weaker units to level up. Don't attack any of the enemies who are part of Horace's group, since this will make him charge at you, and you want to keep him alive. Take the longer path around Horace's group that will lead you to the two villages and obviously have Marth visit them. You probably shouldn't kill the boss until the reinforcements have all come, since you will want as much experience as possible. When all the reinforcements have been dealt with, go ahead and kill the boss without engaging Horace, and capture the castle and you will move on to the next chapter, as well as get Horace.