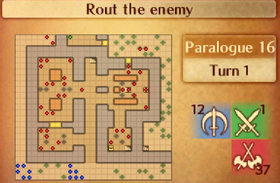 Chapter script
[view]
“The group heads out to visit Leo's son, Forrest. However, Leo seems to be dragging his feet. When the group is attacked by bandits, they learn why Leo was acting that way.”
—Opening narration

This paralogue will be unlocked once Leo has achieved an S-Support with someone.

This paralogue has a rather simple mission, you need to defeat all enemies on the map.

Forrest is locked in a room at the top of the map, and he must survive to battle in order to recruit him. Even though no enemies can reach him, a Fighter/Berserker reinforcement will appear as soon as the battle begins and will make a beeline towards Forrest and will be guaranteed to kill him upon reaching the target. Leo will warn you that the enemy will appear to kill him once the enemies are alerted to your presence, and advises to get as close as possible to Forrest before initiating battle. On the left side, there are two sets of breakable walls that can be used to breach the building. Note that both of the walls are in the presence of enemy soldiers either in or outside, so ensure you have units at hand to provide a wall upon breaching.

All of the enemies are initially dormant, however, once a unit enters their attack range or are attacked by the player, they will start attacking. The Fighter/Berserker reinforcement will also appear and make a beeline towards him. There are several doors blocking the way, which can be opened via Locktouch or looting off several enemies who have Door Keys on them. Rescue staves cannot be used to pull Forrest out of harm's way. However, you can Freeze or Entrap the Fighter/Berserker, which will most likely hit due to their poor Luck and Resistance. While it is also possible to kill the Fighter/Berserker with a Spy's Shuriken or Spy's Yumi, some luck will be needed to kill him in one battle.

Be wary that there are plenty of enemies in the building; notably there are Fighters/Berserkers, Dark Mages/Sorcerers, Knights/Generals and Mercenaries/Heroes inside. Outside, there are two Cavaliers/Paladins east of Forrest's cell; on Lunatic mode, another two will be placed to the west, making it harder to breach the main compound safely. On harder difficulties, many of the Fighter types (those carrying one weapon) will have Certain Blow, which makes them relatively dangerous to deal with. Several Heroes will also have Darting Blow, all of the Knights/Generals Wary Fighter, and all of the Paladins Trample on higher difficulties.

Gazak can be found on a throne tile in the building. On Hard and Lunatic Modes, capturing him is advised (unless you have him in your logbook from previous playthroughs or from the DLC Museum Melee), since he will come with Certain Blow, Pavise and Good Fortune.