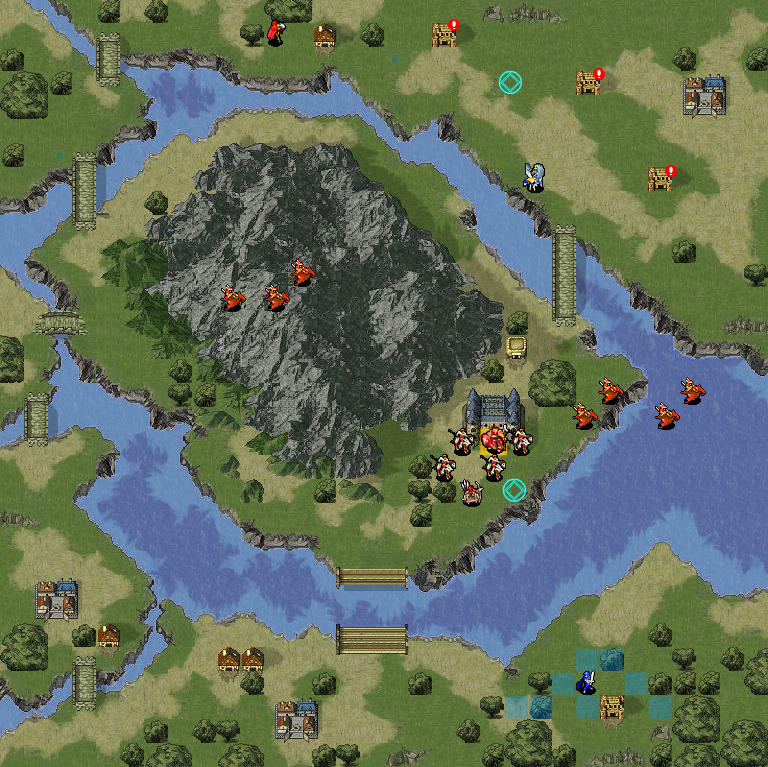 Chapter script
[view]
“Once upon a time, the region of Macedon was a territory under Dohlurian rule. A century ago, the dragonkin rulers sent many slaves to these wild forests, to excavate ruins and build a country. Many slaves were forced to work to their limits, barely fed, and then slaughtered. A young man stood up against such tragic conditions. Iote was his name. He and his companions fled to the forests and fought, astride wyverns, to free the slaves. After Dolhr's demise, the slaves established their own country in these now abundant lands. And the hero Iote was chosen as their first king. And so was born the Kingdom of Macedon, later feared as the domain of dracoknights. However, the mighty Macedon was stripped of Prince Michalis, said to be the second coming of Iote, and is now on the brink of losing Princess Minerva, the so-called "Crimson Dragoon".”
—Opening Narration, New Mystery of the Emblem
“At one time, the Medon region was ruled by the Dolunian Empire. 100 years ago the whole continent was controlled by the dragon tribe, who sent numerous slaves to these undeveloped forests. The slaves were forced to excavate ruins and construct the country. Many people could not find food, were forced to work, and died from abuse. Amongst such tragic conditions, finally one youth stood up. His name was Iote. He and his companions escaped from the forests and fought, riding dragons, to continue the battle of liberation. After Doluna's fall, the slaves established their own country at these rich and newly developed lands. And the heroic Iote was encouraged to become its first king. Afterwards the Kingdom of Medon was feared as the land of dragon knights, and that was how it was born. However, this strong country not only lost its Prince Michalis, said to be the second coming of Iote. But now, even the "Red Dragon Knight", Princess Minerva, has been lost.”
—Opening Narration, Mystery of the Emblem

Abducted Princess is Chapter 3 of Fire Emblem: Mystery of the Emblem and its remake.

Cavaliers will appear from the three northern forts on the following turns:

Palla is recruited at the beginning of the chapter, albeit starting far from the Altean army. She is equipped with a Silver Lance, and as such, is able to take out quite a few of the reinforcement Cavaliers and preventing the thief from destroying the nearby village. Keeping this village alive is VERY important, should you want the full cast of characters, as Julian recruits 3 character in this game (Matthis, Rickard and Lena) and Julian is recruited in this village. After killing off the reinforcements, have Palla rest on any of the 3 forts to prevent further enemies from appearing.

As for the Altean army, have them go around the mountain instead of using the drawbridge (a key is obtained if Marth visits the nearby village), due to the high number of enemies. Bord can be recruited from the village in the west, however this is in the remake only.

The enemy Dracoknights residing on the mountain will not attack unless the player attacks them first, or uses the nearby Armory. One of them holds a Master Seal. (Note that in lunatic all of the DracoKnights will attack you if any of your characters crosses the bottom left bridge)

After moving up to the northern area where Palla is, visit the village to recruit Julian. Julian can be used to recruit Matthis by speaking to him. Slowly fend off the Dracoknights and Cavaliers, then advance to the boss. Since the boss is a General, it is best to battle him using Linde due to his low Resistance.

Before seizing the castle, be sure to find the Iote's Shield hidden around the castle perimeter. (only in the original game, New Mystery of the Emblem moved the item to Chapter 13x). 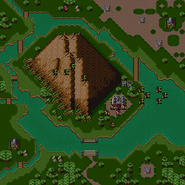