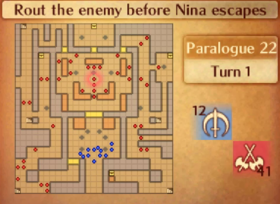 Rout the enemy before Nina
escapes

Chapter script
[view]
“The group defends an important treasure from a group of bandits. Niles takes charge of the defense plan but is shocked to learn that his daughter, Nina, is in the group.”
—Opening Narration

This Paralogue will be unlocked once Niles has obtained an S-Support with someone, except if he does so with the male Corrin.

This map requires that you rout all enemies on the map before Nina escapes. Nina must be defeated as well, so do not worry about the "Allied Unit" death scene that occurs when she is defeated, she has to be defeated to complete the chapter.

There are three areas that Nina can escape from: a small opening on the west wall and east wall and the large entrance where your army starts from. It is possible to fully prevent Nina from fleeing if you have units stationed on the exit tiles, even if she has Pass. This also applies to the other thieves accompanying her, who will also attempt to flee through those openings. Furthermore, after a few turns, ALL enemy units will begin fleeing the map. Nina immediately starts off by opening the northern most room containing a Goddess Icon while the other three Adventurers will open the other three. Once she has pilfered the Goddess Icon, she immediately beelines towards the western exit, which will take her roughly 7 turns from that point. If blocked, she will head to the southern one, and finally eastern if that one is blocked as well. She will not attack any allied units as she prioritizes escaping, unless if they happen to block her escape route.

Odd though it may seem, you can get all of the treasures in the map without entering the room where Nina starts out. You will need to have Niles use locktouch to open the bottom left door, and you will need a unit armed with Lunge to easily access the right half of the map.

The treasure chests on the right half of the map can be obtained with ease. Bait the enemy outlaws to the right of your starting position into attacking you. Finish off all but one of them, then have Camilla, paired up with another unit, use the Lunge command on the survivor. Assuming Camilla survives the encounter, have her drop her partner onto the nearby staircase by the end of turn 5, then finish the fleeing Adventurers off before they can escape. As the enemies here will only attack when someone gets in their range, Camilla will not have to endure any additional rounds of combat, as the Adventurers will prioritize escaping over attacking.

The left half of the map is almost entirely composed of nonmagical opponents, and the pair of Sorcerers guarding the chest can largely be ignored as they only attack units that move into their range. Units with high defense are extremely useful for this area. If you can reach the western staircase by turn 5, you can block it off to prevent reinforcements from showing up, then block off the exit to prevent the Adventurer from fleeing. Afterwards, you can defeat Nina to effectively secure a victory on the map.

Though it is unnecessary to enter the northern room, it still contains a slew of opponents that provide good amounts of EXP. Whoever opens the door at the northern end of the starting room will be immediately exposed to attacks from a slew of enemy units, so you should plug the nearby chokepoint immediately. On higher difficulties, this is made more difficult due to the presence of a Wyrmslayer-wielding Hero, an Adventurer with a Shining Bow, and the addition of Inspiration to the nearby General's list of skills. If you are incapable of holding the chokepoint, you may break open the bottom right wall instead.

Finally, as an additional option... if you just want to recruit Nina and don't care about the treasure or the experience from defeating enemies, you can use a valuable charge on an Entrap staff to grab Nina on turn 1, then defeat her. The enemies will eventually attempt to escape, even the center-chamber enemies once a door or path is open, and you can let as many as you like go if you're having trouble with the map.

Note: Due to an AI bug, if Nina has any Rally abilities, such as Rally Skill, she will ignore her intended treasure chest and head towards the exit immediately, significantly increasing the difficulty of the chapter. If Niles has no Skills other than Locktouch, Movement+1, and Rally Skill, you should remove that Skill before entering this chapter, then re-equip it during preparations. As Nina's skillset will be generated a second time after you complete the chapter, she will keep the skill when she joins your party.