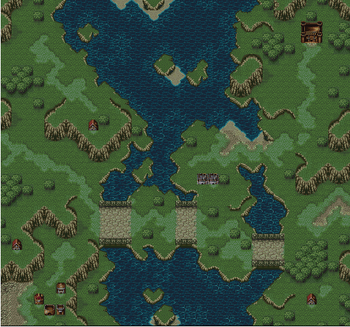 Chapter script
[view]
“Leif's Liberation Army made its way to Manster through the pass formerly guarded by Fort Danzig. Before them stood the vast River Thracia, the largest river in the Thracian Peninsula. It was this river's water that blessed much of North Thracia with rich, fertile land. Just beyond its rapid waves, the city of Manster awaited....”
—Opening Narration

Across the River is Chapter 22 of Fire Emblem: Thracia 776.

Without the proper resources, this chapter can be nightmarishly difficult. Having access to the right staves to at least two Restore staves is nearly essential to complete it. With the right staves, however, the chapter's difficulty can be greatly reduced. If you already have what you need, you can try the following strategies to make the chapter much easier on yourself.

There are three main threats to contend with in addition to the troops scattered around the map: the two stave wielding bosses who cannot be targeted by Silence, Berserk, or Sleep, the reinforcements coming from the forts and the far right side of the map, and the Gelben Ritter. There are also a few Soldiers close to your starting point that will immediately try to run. They have Killer Lances and Holy Waters, but you can ignore them if chasing them down is too much of a hassle and you don't need any more.

The bosses are the most difficult to escape if you aren't already prepared. If you don't have the staves mentioned above, you will just have to bear the attacks and use Restore staves to mitigate the damage. First priority should go to the berserk units, then sleeping and silenced units depending on how useful they are to your army. In addition to the status ailments, the bosses also have a combined fourteen leadership stars between them, which gives every unit on the map an unholy bonus to Hit/Avoid. Your units will have a much harder time dodging than they usually do, so be sure to take that into account with your Swordmasters and Mages. It also applies to the ballistae and Bolting users in the south, so be particularly careful draining those as well. Removing Saias early is very helpful for this too, since he contributes 10 of the 14 leadership stars causing this. He will otherwise leave on his own after 40 turns, so it may be in your best interest to wait that long before advancing.

The reinforcements are, on their own, relatively weak. But after the leadership stars are added they will still be a force to be reckoned with. They will start appearing from the tenth turn, three mounted units from the far right and an Axe Knight from the forts. If you still have to deal with the full leadership bonus, it may end up being easiest to stay in the starting area and use your toughest units to blockade the area between the two cliffs. This will let you use supports, the Charm skill, and the King Sword most effectively, keep your weaker units safe, and keep you from having to worry about the ballistae. The reinforcements will also only spawn if fewer than eight are currently on the map at any given time, so giving them a longer distance to travel will result in fewer units to deal with by the end. They will stop spawning after turn 20, so hold out until then and then wait there until turn 40 to get Saias to leave before dealing with the rest.

Draining the ballistae and Bolting tomes should be simple enough by this point. Just watch out for the Sniper and his Master Bow. You should also try to take the Elite Sword from the hero next to him. Be sure to stop by the shop too; this is your absolute last chance to stock up on Door Keys. They will be completely necessary in the coming chapters, so be sure to have as many as possible. If you still need to promote any units, you an also buy Knight Proofs in this chapter though they're expensive at 8,000 gold each. The enemies along the bridge should pose little problem at this point, but be careful of the Killer Bows that the Bow Knights are carrying. DO NOT MOVE ONTO THE FAR RIGHT BRIDGE UNTIL ALL OF YOUR UNITS ARE PAST THE FIRST ONE. Once you pass an invisible vertical line that starts two spaces before the rightmost bridge, the leftmost one will be destroyed. Be sure not to strand any strong units on the left side of it. Also try to drain the last three ballistae before getting within range of the Gelben Ritter.

Most members of the Ritter are moderately difficult. They are bolstered by Reinhardt's five leadership stars and all have Thoron tomes, but their stats are otherwise nothing special. Be very careful of Reinhardt himself though; he has very high stats, weapons that always hit twice, a decent chance of landing a critical, and some very potent skills. He is easily the strongest unit on the map and should be dealt with cautiously. Before attacking him, have Olwen talk to him if you are using her so she can get a Holy Sword. It's relatively helpful, but since she's the only unit who can use it there's no point in getting it if you don't use her. If you have a Silence staff and a staff user with at least 15 magic, you can use a Holy Water/Magic Up staff and silence him to make him a bit easier. A Sleep Staff would be even better if you can spare one. Be sure to do this after talking to him with Olwen though since he cannot talk if silenced or asleep. Either way, try to engage him from the forts if possible with whatever supports you can manage. A Horseslayer will be very helpful if you can use one. Be sure to use a Holy Water before engaging him either way. Once he's dead the rest of the Mage Knights will try to escape. You can chase them down for EXP if you want to or just leave them be.

Once they are all taken care of you should have little else to worry about. The Paladins have Horseslayers and Armorslayers, but are otherwise easy enough. Cowen has an obnoxious Blizzard tome to be aware of, but is otherwise not particularly difficult compared to what you've just been through. Again, just be sure you don't let Leif get hit by it if you don't have any Restore staves or you will have effectively lost. Try to get a Thief to steal his Restore staff if you can; it will come in handy in the next few chapters. Either way, you can finish him off however you like and move on.