In the First Generation, the Aed Desert (the west part of it) is journeyed through by Sigurd and his army during Chapter 5 on there way toward Grannvale, but the most noteworthy event is the Aed Massacre, in which Travant ambushes Quan, Ethlyn, and the knights of Leonster. Sigurd hears about the massacre when he reaches Phinora Castle.

In the Second Generation, the Aed Desert (the east part of it) is journeyed through by Seliph and his army when he is trying to reinforce Leif. First, Seliph captures the Aed Shrine, and learns about what it has to do with the Loptr Church. Afterward, Seliph captures Dahna Castle after the capture of Melgen Castle, and here he learns about the Miracle of Darna.

Vaha, the Mage Fighter, is stationed at Phinora Castle, most of the Loptr Church are from the Aed Shrine, Lene grew up at Darna, and it is presumed Coirpre was here for a little while before being adopted by Hannibal.

Aed was a god of the underworld in Irish mythology. 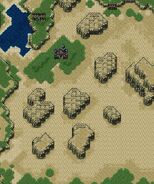