View source
“While on the march through the Aed Desert, Quan and Ethlyn are suddenly attacked by the Thracian army and die far from their homeland. ”
—Narration of the Aed Massacre in the Opening of Thracia 776

The Aed Massacre (イードの虐殺) is an event which occurs in Chapter 5 of Fire Emblem: Genealogy of the Holy War, referring to Travant's ambush of Quan, Ethlyn, and Leonster's Knight Squadron, the Lance Ritter, during the Gran Calendar Year 761. As the Lance Ritter marched north through the Aed Desert in an attempt to reinforce Sigurd's fateful advance on Belhalla, Travant's dragon knights came up from behind to trap them in the desert. The severe loss of movement caused by the desert terrain, coupled with the fact that the dragon knight troops all carried Horseslayer lances, resulted in the entire knight squadron being decimated in short order. Because he possessed the holy lance Gáe Bolg, Quan was to some extent able to resist the waves of dragon knights attacking him even after all of his comrades were slain. However, Travant grabbed the infant Altena from the side of her mother Ethlyn's lifeless body and, threatening to kill her, demanded that Quan hand over the Gáe Bolg. Admiting defeat, Quan gave up the lance to save Altena, thus cementing his fate at the hands of the dragon knights.

After the massacre, Travant took Altena and the Gáe Bolg back to Thracia, leaving Magorn to lead the remaining dragon knights in battle against Sigurd's troops.

With Leonster's army largely decimated and the loss of the Gáe Bolg, Thracia seizes the chance to launch an invasion of the Manster District, starting with Manster itself. After defeating the defending King Calf of Leonster's remaining forces at the Battle of River Thracia, Thracia then attacks Leonster Castle, sets it ablaze, and for a short time, takes control of the Manster District. However, Grannvale, now under control of Arvis after his victory at the Battle of Belhalla, invades Manster (with one of the victims being Grahnye, Eldigan's widow and Ares' mother) and forces Thracia to sign a treaty which annexed it as a territory of Grannvale. Arvis then installs Duke Bloom of Friege as its new king. As a favor to Raydrik for his role in Leonster's downfall, King Bloom makes him the Duke of Manster.

During all this, Quan and Ethlyn's son Prince Leif manages to evade the new Grannvale Empire's forces that are trying to capture him, thanks to the efforts of Quan's loyal pupil and retainer Finn, among others. Around a decade later, Leif would be reunited with his sister Altena (now the Princess of Thracia and one of Travant's lieutenants), convincing her to join their cousin Seliph's Liberation Army.

In Thracia 776, it is revealed that Manfroy and Veld manipulated Travant into carrying out the Aed Massacre. 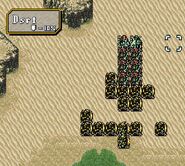