Aegina (アイギナ Aigina) is a playable character from TearRing Saga: Berwick Saga. She is a princess of Rhianna who went into hiding to escape the Raze Empire's grasp.

Aegina is an odd unit. At first glance, she appears to be the usual early-joining growth oriented mage in other Fire Emblem titles. While she is certainly usable this way, it is not necessarily the best way.

Although she can use Fire magic, Aegina is a Wind specialist above all else. While Wind magic has low might, it is able to hit consecutively. This is a blessing and a curse for Aegina. When properly boosted and given a stronger Wind orb (such as Windstorm), Aegina can tear through the enemy without difficulty. On the other hand, due to how the weapon experience system works, these tomes cause Aegina's Wind skill to grow more slowly, as a single miss in one of the hits can slow how quickly she builds weapon experience up. This can cause occasional hit problems and on ranked runs, makes reaching her promotion very frustrating. Her durability is also very poor, so putting her at the front lines can be risky.

She gets a unique orb in the form of Pallas Rhiana, which is a 1-2 range orb that strikes 4 times and restores 8 charges at the end of each chapter. When combined with Focus and a magic boosting brace, Aegina can be a delete button for extremely bulky enemies like Generals and Fire Wyverns. However, its hit rates are worse than the basic wind Orb Airblade, so without Focus, Aegina frequently does not connect all four hits; it's not unusual for her to only hit one or two out of the four attacks consecutively.

Because of how stagnant enemy resistance is throughout the game and having all her bread-and-butter tools at jointime, Aegina does not demand much (if any) experience investment. The resources she primarily wants are magic or hit boosting accessories and/or food. This means that on a map with certain bulky targets, Aegina can be brought along to take them down effectively, even at base.

Although Aegina is certainly a flawed unit, she is by no means a bad one. Ironically, she is rather flexible in that she is useful as both a short-term and a long-term unit, even though her usage on the battlefield is specialized. How useful she is as a team staple is ultimately up to the player, but she is always worth consideration for a deployment slot.

Aegina's portrait as a Sage. 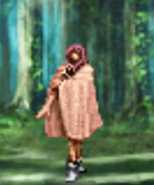