Chapter 2 What Lies Beneath

Michael Sinterniklaas
[view]
“The Ashen Wolves are a house in name alone. They are eager students with no teacher to guide them. If you could find it in your heart to take them under your wing, I would be most grateful.”
—Aelfric

Aelfric oversees Abyss under orders from the Church of Seiros. Saddened by the ruined state of Abyss, full of hunger and crime, he managed to guide the people to some semblance of order. He is calm and forgiving, and despite their distaste for the Church, the people of Abyss tend to trust him. The creation of the Ashen Wolves was also his suggestion.

Aelfric is a cardinal of the Church of Seiros. In his childhood, he was an orphan who wound up at Garreg Mach Monastery. It is there he met Sitri, whom he loved greatly. He also idolized Jeralt whom he admired for his courage and valor. Despite his affections for Sitri, Aelfric was more than happy with letting Jeralt marry Sitri when it became clear of her affections for the Knights of Seiros captain. However, Sitri's sudden death deeply affected him.

After becoming a Cardinal in 1170, he was among the few Church officials to be privy to Abyss. Upon visiting it for the first time, he pitied its denizens and desired to help them. Through a plea to Rhea, some of the youths down in Abyss formed a fourth, unofficial Officers Academy House, the Ashen Wolves.

In 1175, while exploring Abyss, Aelfric stumbled upon Sitri's body. Despite having been dead for over 10 years, she was somehow still in pristine condition, but clearly still dead. Having heard of a mysterious rite enacted centuries in the past by Seiros to revive her mother, Aelfric desired to enact this Rite of Rising in the hopes of reviving Sitri. To this end, he gathered those who bore the Crests of the Four Apostles: Aubin, Noa, Timotheos, and Chevalier; Yuri, Constance, Hapi, and Balthus, respectively.

One day in 1180, the child of Sitri and Jeralt, Byleth, alongside the current three House Leaders of the Officers Academy (Edelgard, Dimitri, and Claude) plus three students of each House (Linhardt, Ashe and Hilda) happen upon a secret passage to Abyss. After a tense battle between the Ashen Wolves and Byleth and their students, he meets Byleth for the first time. Knowing that they are Sitri and Jeralt's child, he fondly tells them more about their parents. Knowing of their skills as a mercenary and as a new professor, he requests that they take on the Ashen Wolves as their students, which they accept.

Working with Yuri (whom Aelfric forced into aiding him by kidnapping his beloved mother), he obtained the Chalice of Beginnings. With his intentions made clear, he also kidnaps the three Ashen Wolves with Yuri's help and enacts the ritual. Despite discovering that Yuri was actually a double agent, working on Rhea's behalf, he begins the ritual. Thanks to an intervention by Byleth, the ritual is abruptly halted, but he has nearly completed it nonetheless.

Despite the severe consequences, Aelfric is too blinded by his desire to see Sitri once more that he decides to push through. However, in its incomplete state, the power of the Chalice and Ritual goes haywire, causing the Chalice of Beginnings to absorb him and Sitri's corpse, warping Aelfric into a terrifying Umbral Beast. Despite its colossal power, he is eventually slain, causing his body to dissipate.

If the Cindered Shadows story has been completed, after the Rite of Rebirth, a member of the Abyss will reveal that Aelfric has been expelled from the Church because of a scandal.

After Flayn has been saved from the Death Knight, Aelfric will appear at Sitri's grave, simply known as Monk. He'll ask Byleth to bring some flowers to him so that he can pay respect to Sitri. After completing the mission, he'll ask Byleth to take care of themselves and Jeralt, and that he doesn't have regrets anymore, upon which he leaves.

Aelfric is a kind man who pities the denizens of Abyss and desires to help them live better lives and perhaps one day return to the surface. It is he who created the Ashen Wolves house to enforce this desire. Many of Abyss' dwellers are touched by his kindness and are fond of him.

He was close to Jeralt and Sitri, Byleth's parents, especially the latter whom he loved dearly. Despite his affections for her, he only wanted her to be happy and was more than happy to see how much she loved Jeralt and even more so her love for her child. Her death deeply impacted him as much, if not more than, it did Jeralt.

With Sitri's death, the emotionally-broken Aelfric became distrustful of Rhea, who he correctly believed was somehow involved with her death. This was solidified when he discovered Sitri's body frozen in time in Abyss, as Rhea couldn't bring herself to simply bury her "daughter". His love for her warped his sense of reason as he desired to revive her at any cost, even if it meant having to harm her child and sacrifice others.

In the end, as twisted as he was, it is also made clear that his intentions were more misguided than actually villainous. It also did not take away his genuine kindness for the dwellers of Abyss as he had formed the Ashen Wolves over five years prior to discovering Sitri's body. The Wolves themselves, despite being understandably unhappy at his actions, believed that Aelfric was very bad at playing the role of a villain.

As a Mission Assistant[edit | edit source]

As an Enemy[edit | edit source]

The Rite of Rising[edit | edit source]

A Beast in the Cathedral[edit | edit source]

Aelfric is an Anglo-Saxon name meaning "Elf Ruler." Several Ango-Saxon religious personalities of the past have held the name itself. Dahlman is a Swedish ornamental name meaning "valley man."

Alphard, Aelfric's Japanese name, is named after the brightest star in the constellation Hydra. The name stems from the Arabic الفرد (al-fard), "the solitary one".

CG Artwork of Aelfric attempting the Rite of Rising on Sitri.

Aelfric as the Umbral Beast. 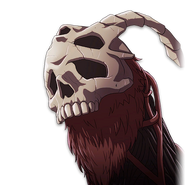