Tiger
[view]
“If the fire don't roar like a furnace, it don't scare me! Mwah-ha-ha! I'm gonna rip your throat out”
— Agony fighting Micaiah

Just like his brother, attacking him while he's not transformed makes him a cakewalk, but when he is transformed he's a serious challenge. Some of your weaker members like Meg and Edward are most likely to die in a single blow. Letting Nolan, Aran or Sothe pull him and then finish him off with ranged attacks. Magic is most effective!

Vs. Micaiah
Agony: Oooohhhh…a beorc mage. Shiny, sparkly magic makes me soooo scared.
Micaiah: We do not want your treasures, and we mean no ill will. Step back, and we will not harm you.
Agony: If the fire don't roar like a furnace, it don't scare me! Mwah-ha-ha! I'm gonna rip your throat out!

“Grrrua...gack! What happened to me?”
—Agony's death quote in Radiant Dawn.

Agony's battle model as an untransformed Tiger in Radiant Dawn. 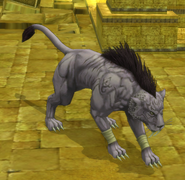