“I think you'll change your tune after seeing who's been slipping into my manor and stealing from my vault! It took a little roughing up, but eventually we got a confession out of the kid. Apparently, my missing treasures have been paying for your medicine for quite some time. As I'm sure you're well aware, stealing from a member of royalty is a grave crime. I'd rather not have to kill a kid, but the law is the law.”
—Ahab, in a conversation with Rishel

Ahab (アハブ Ahabu) is an enemy character from TearRing Saga: Utna Heroes Saga. He is the younger brother of King Dagnell of Salia. He is also the boss of Map 23.

Prior to the game's events, Ahab launched a coup against Dagnell, seeking to usurp the throne. He slaughtered all of the heirs whom he could find and then imprisoned Dagnell and Queen Maria at Zacharia's recommendation. He also ordered Zacharia to secretly murder Princess Maria. His actions resulted in the citizens of Blood starting a rebellion against him.

During the story, Ahab is fighting against Lord Lionheart of Selba for control of Salia. When Rishel refuses to provide aid to him, Ahab threatens to execute Bud and uses her as a hostage against him. He is eventually killed by Holmes's army during its liberation of Salia. If Lionheart defeats him, Ahab reveals that he could not bring himself to kill Dagnell and Maria, which is his true reason for imprisoning them, contrary to what Zacharia believes.

“You damned stray dogs... What the hell do you want from me!?”
—Ahab's default battle quote

Lionheart: Your time is up, Viceroy. This day has been fifteen years coming.
Ahab: Raziel the Lionheart... You're just like Lord Roberto. Why can't you understand?! I'm only doing what needs to be done! How long will you continue to torment me!?
Lionheart: What needs to be done?! You've brought this kingdom near to ruin, and you've allowed the Empire to run free inside our borders! I have nothing more to say to you. Pay for your sins with your life!

“Kuh... You imbeciles...!”
—Ahab's default death quote
“Y-You ignorant fool... My brother paid no heed to my warnings, and he put the entire kingdom in danger by allowing the princess to live... He was too weak-hearted to make such a painful decision... He was willing to repeat the disaster that our father endured if it meant his daughter could live... But I knew the truth: Princess Maria could not be allowed to become Neuron... But when I ordered Zacharia to kill her, he had whisked her away, out of my grasp... So when my plot was made public, the only way I could ensure Salia's continued survival was by my own leadership... But now that's all over, isn't it? Lionheart... The King and Queen are still alive. They're in the catacombs under the castle... Zacharia believes I've kept them alive in order to force his obedience, but in truth... I just couldn't bring myself to kill them. It's all in your hands now, Lionheart... I leave Salia... to you...”
—Ahab's death quote when defeated by Lionheart

In Herman Melville's Moby Dick, Captain Ahab is a notorious whale hunter who wants to get revenge on the white whale that bit off his leg. 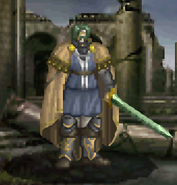