Vendor (Radiant Dawn)
[view]
“And I am Aimee, a vendor of...various goods. I have a wide variety of items for sale. I hope you'll stop by soon.”
—Aimee, introducing herself to Ike in Path of Radiance

Aimee (Larabel in the North American versions of Archanea Series) is a non-playable character first appearing in Fire Emblem: Shadow Dragon and the Blade of Light and from then on she has become a recurring character in the Fire Emblem series.

She usually appears as the item shopkeeper.

Shadow Dragon and Fire Emblem: Mystery of the Emblem

Aimee runs every single vendor in the game, and serves a rather minor role.

In these games, Aimee has a storyline role as a member of the Merchant Convoy, which travels with the Greil Mercenaries.

Alongside Ilyana and Kurthnaga, she appears as an ally unit in Chapter 1-3 of Radiant Dawn.

In Chapter 3-2, she gives the Silver Card to Soren as a temporary gift after he compliments her in hopes of earning a chance to buy items at a lower price.

In Chapter 4-1, she gives Rexcalibur to Ike so that he can give it to Soren, with her excuse being that she is attempting to get Ike's attention.

In the Base Conversations across the Tellius Series, she is shown to be quite sneaky and flirtatious, always trying to find a way to ploy Ike into loving her and she does not try to hide this at all, being very open about it. She's very direct with her love of Ike, frequently makes advances on him (sometimes to the point of harassment), with one instance having her outright say it in front of him, but he always rejects her.

She also dislikes Soren, seeing him as an obstacle in her pursuit of Ike. She can barely tolerate him, as seems to slightly warm up to him after he tells her about the types of foods that Ike likes so that she can cook for him. She will occasionally give a gift or do a favor for Soren, but rather indirectly, as only after Ike is involved in the situation will Soren either intervene with Aimee and receive it, or Aimee giving a gift through Ike.

“What carelessness on my part! I'm injured. Go on without me. I don't want to be a burden. No, no I insist. I'll get away somehow. Until we meet again!”
—Aimee's Retreat quote in Fire Emblem: Radiant Dawn Part 1, Chapter 3.

“Welcome to Larabel's! Take a look at what's on sale!”
—Larabel's Shop Quote when any Player Units entered in Fire Emblem: Shadow Dragon and the Blade of Light.

Larabel's shop in Shadow Dragon and the Blade of Light. 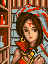 Larabel's shop in Mystery of the Emblem.

Larabel's portrait in Shadow Dragon and the Blade of Light.

Aimee's portrait in Path of Radiance.

Larabel's portrait in Shadow Dragon and New Mystery of the Emblem.