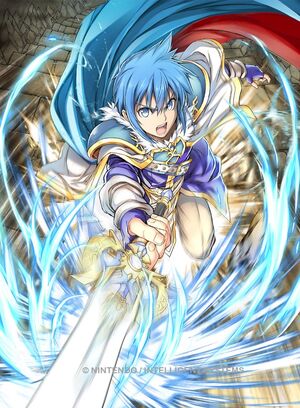 Villager
[view]
Al is the main character of the Fire Emblem: Hasha no Tsurugi manga. He is a brave, but rash young boy who grew up in the mountains along with his foster father, Magough. The thought of giving up without trying does not exist in his mind. He always carries the titular Champion's Blade and eventually joins Roy's battle to defeat the invading Kingdom of Bern. The weapon Al's Sword from Fire Emblem: The Binding Blade is a reference to him.

During his first battle with Zephiel at Missur, the Fire Emblem awakens Al's true power and he promotes to a Dragon Lord. This promotion changes his appearance, although he is unable to retain this form until later. He is not strong enough to survive, so his body was destroyed, but he is saved by Tiena and Athos. He then saves Tiena in his Dragon Lord form. Tiena cannot tell that it is Al until he starts to show some personality and seals the power in the dragon stone. However, Tiena does not seem shocked by what happens to Al (at least like Roy).

As the Lycian army marches towards Bern, Al travels to find the truth about his heritage - why can he use the Champion Sword used by Bern's ancient army and why is he a dragon?

With the help of the mountain hermit Niime, Al discovers that he is the son of Hartmut, the leader of the Eight Heroes, and Melitha, a female dragon. Hartmut had sealed him and his mother away using the Binding Blade, but the seal was broken by those who wished to abuse the power of the Founding Dragons.

When the Etruria army reaches Bern's capital, Al and Roy go ahead to fight Zephiel. However, during the battle, Zephiel seals Al. After Roy defeats Zephiel, Guinivere unseals Al with the Fire Emblem.

After the war with Bern is over, Al disappears for two years in which he is assumed dead. When he returns, Al is named Viscount Eldried and marries Tiena, the princess of Tania.

Al is illustrated in the trading card game Fire Emblem Cipher with the following cards: 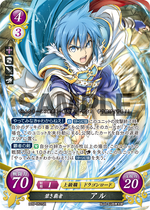 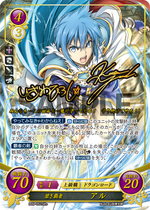 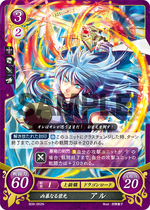 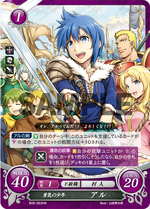 Artwork of Al and Roy in Fire Emblem 0 (Cipher) by Kotaro Yamada.

Artwork of Al in Fire Emblem 0 (Cipher) by Kotaro Yamada.

Al as a Villager in Fire Emblem 0 (Cipher). 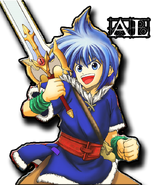 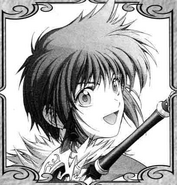