Cavalier
[view]
“Ah! So you're Silvia... Pardon me for sayin' so, but you are adorable!”
—Alec

Alec is a playable character from Fire Emblem: Genealogy of the Holy War. Alongside Naoise and Arden, he is one of the knights of Chalphy who accompany Sigurd in his war against Verdane. He is also the best friend of Naoise.

In contrast to Naoise, Alec is best described as having a laissez-faire and carefree attitude to his knightly duties, due to his playful personality and habit of being rather teasing, if not rude to his fellow knights. Alec has a fondness for light-hearted banter with his fellow knights, often teasing Arden for his size, and a strong love of women (especially ones from Jungby) that leads him to gravitate towards flirting with Silvia who responds in kind in their first conversation together.

Despite his more casual demeanour, he shares the same powerful loyalty to Sigurd as the rest of his companions, and is one of the first ones to agree to step in and help crush the Verdanite horde. In addition to this, despite his admission that he likes to see beautiful women, he is faithful to his wife and vows never to cheat on them, as seen in his lover talk with Brigid in Chapter 5. He also shows worry for his wife's safety, such as in his lover talk with Silvia in the same chapter.

Humorously, his lovers conversation with Silvia implies that his flirtatious nature does indeed come back to trouble him, as an implication is made that neither he nor Silvia knew that he had gotten her pregnant with Lene.

As the Abel Archetype of Genealogy of the Holy War, Alec's stat growths are well rounded with a focus on Skill. While Alec gets the benefit of being a mounted unit, which is important in Genealogy of the Holy War, he usually winds up being less impressive than your other mounted units. Alec's offense is very consistent, in that he has very high Accuracy and enough Speed that he should be able to Double Attack most units in the game, but, due to his unimpressive Strength, his damage will be consistently on the low side, particularly since he has some trouble obtaining strong weapons and cannot use A-level Swords or Spears even after his Promotion, which only improves his lance rank, meaning that outside of the first two chapters, he has a lot of difficulty in killing enemies despite his ability to double.

There are some options to remedy these shortcomings, such as giving Alec the Power Ring from Chapter 3 or having Ayra sell him the Brave Sword. However, these items are highly contested, and Alec probably is not the best candidate to receive them.

There is, however, another trick that could make Alec better in dealing damage. Since every Paladin receives a +5 bonus in Magic, he could use this bonus - along with the Magic ring that Sandima drops in Chapter 1 - to make some very efficient usage of Magic Swords. If Alec is promoted by Chapter 3, he will be able to kill most infantry, unpromoted units in one round. And even after this chapter, he will still be able to deal consistently great damage to most enemies he faces. The good news are that those resources are usually not contested by anyone - except potentially Erinys after she promotes, though she usually has better combat with physical weapons thanks to learning Adept after promoting.

All in all, Alec is good unit thanks to his horse, but he will need special resources to be truly great at combat.

Alec has evenly split growths aside from Magic and Resistance, meaning his children will wind up well rounded. His lack of Holy Blood means that none of his stat growths are above average and he can only pass on B-level weapons to his children. Pursuit is a common but important skill to pass on, and Nihil can be very useful for some children to inherit. Alec is generally a safe, conservative pick for a father that will result in average children that will at least have Pursuit. A big problem for Alec is that Beowolf is nearly identical to Alec, except that Beowolf can pass on A-rank Swords and has preferable growths for most pairings. So for any given pairing, Beowolf is always better. The sole exception to this is Erinys due to Fee gaining Nihil.

Alec is best paired with Lachesis. Brigid, Erinys, Edain are decent choices with flaws. Sylvia is encouraged by the game's mechanics as one of Alec's main love interests, but technically speaking she's merely a so-so option unless there is no other alternative. Ayra and Tailtiu should be avoided due to a lack of inheritable skills, items, or poor stat distribution.

Silvia is the choice encouraged by the game's mechanics for Alec to pursue, but the results are fairly poor. Lene and Coirpre are both support units, so they do not benefit all that much from receiving Pursuit from Alec, even combined with Silvia's Adept. Nihil is also of dubious use to them as they are unlikely to be fighting much, let alone fighting units capable of Critical. Nor will Alec be able to pass anything but rings on to Coirpre. Despite the children gaining well-rounded stats, Coirpre's Magic will suffer and it is arguably the stat he cares about the most. Many players who pair Alec with Silvia do so for story and dialogue rather than stats.

In Chapter 2, after Anphony Castle is captured, Alec may speak to Silvia, and she will gain 100 love points with him.

In Chapter 5, if Silvia/Brigid and Alec are lovers, she may speak to him, but nothing will result of it.

Alec is illustrated in the trading card game Fire Emblem Cipher with the following cards: 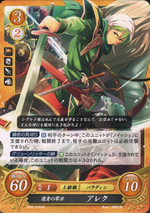 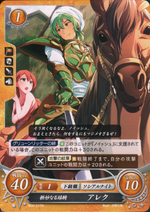