Cavalier
[view]
“If you're staying, then so will I. I won't allow you to run headfirst into certain death alone.”
—Alen talking to Lance in a support conversation.

Alen is a playable character in Fire Emblem: The Binding Blade. He is part of a family that has served House Pherae for a long time and, along with Lance, serves and travels with Roy to take back the lands annexed by Bern. He is the more reckless out of the two Pheraen cavaliers. Alen first appears in Chapter 1, when he is escorting Roy back to Pherae from Ostia. Unexpectedly, the castle of Pherae is being attacked by bandits. Along with Lance, Marcus, Bors, and Wolt, he helps Roy to defeat the bandits and save those trapped in the castle: Lilina, Eliwood, Roy's ill father, and Merlinus. He continues to loyally fight for Roy throughout the rest of the game.

He makes a brief cameo appearance in Chapter 17 of the Hasha no Tsurugi manga.

Alen is a reckless knight with a fiery personality. His fighting style is often to charge into the enemy with brute force. To Thea, he explains that it is because as a cavalier of the army, he must show his strength to the enemy. However, Marcus advises him not to be so rash when fighting. Although he is daring, he takes his job as a knight very seriously. He is very devoted to protecting the other soldiers, especially Roy. He trains very hard to get stronger, even on the battlefield, in order to help Roy.

Alen says little about his past in his support conversations. He is a very good friend of Lance and as a Pheraean knight, his job is to protect Roy.

Alen will be a strong and bulky Cavalier with his great HP growth and decent Strength and Skill growths. He has nice Strength, Speed and Defense bases as well, though of the two starting cavaliers, he will be slightly more inaccurate and a bit slower but not by much. In Hard mode, he is one of your best units to train as he has relatively good starting bases with decent growths overall. Using him and Lance as a pair will make them a powerful duo, rivaling up as one of the best units in the game.

Alen contributes significantly early game, as he is one of three Mounted units you will be guaranteed to have your whole playthrough. Having both Swords and Lances allows him to be versatile in the early game and it only gets better as he grows. With his decent HP, Strength, and Defense bases, Alen will remain strong during the mid-game and his starting D Rank Lances will usually allow him to use Killer Lances early. Upon promoting to Paladin, he gains E Rank Axes and +1 to Swords and Lances. His Axe Rank isn't really useful given the generally low accuracy for most Axes and Alen's low Skill base that remains low given his shaky Skill growth but the bonus to Defense and Resistance are very welcome and the +2 to Constitution lets Alen use a lot more Lances without taking any speed penalties.

By the end of the game, Alen can be considered to wield either Durandal or Maltet. Depending on player preference. With Durandal, he becomes even stronger as it gives him a +5 Strength bonus, allowing him to kill a lot bulky enemies more reliably. Maltet on the other hand grants him much appreciated +5 Skill. Which can patch up one of his weakest stats. His high movement from being a Paladin also allows him to contribute more on the larger maps of the end of the game and his control of the Weapon Triangle giving him a lot of options on what enemies he can take care of.

Alen - Ferocious Knight (猛ける騎士 Takeshikeru kishi)
"Upon returning to Pherae with Roy, Alen proceeded to help his master rebuild the trampled land. His fire and powerful will of always pushing forward no matter what stood before him inspired many and gave them a new hope to live."

Alen is illustrated in the trading card game Fire Emblem Cipher with the following cards: 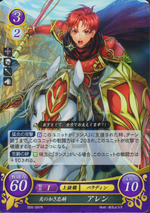 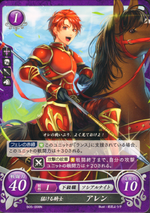 Alen's name is a reference to Elyan the White, the knight who helped Sir Lancelot rescue Lady Guinevere, and later followed him into exile.