Ray Chase
[view]
“Some of our kingdom's subjects objected when I joined this order. But I wanted to do my part. Still, there are others who say that I don't behave quite like a prince ought to anyway.”
—Alfonse speaking with Kiran

Alfonse is a main character and protagonist in Fire Emblem Heroes. He is a prince of the Askr Kingdom and a member of the Order of Heroes. He is the older brother of Princess Sharena and the son of King Gustav and Queen Henriette.

Being a prince of the kingdom of Askr, many people, his own father included, protested when he joined the Order of Heroes, though others felt it was his usual behavior. Prior to the events of Heroes, he was close friends with a fellow member named Zacharias, who eventually disappeared, and another hero he befriended had left to go home, leaving Alfonse cautious of befriending other heroes. This is why he repeatedly reminds Sharena not to get too close with the other Heroes.

Returning to Askr, Alfonse finally reunites with his mother. Before he can meet with his father, mysterious reanimated soldiers wearing Emblian armor appear. Learning that these soldiers are minions of Hel, Alfonse assists in fighting them back.

Later on, Alfonse meets with King Gustav. The problems between father and son are brought to light: about how Gustav doesn't approve of Alfonse's reckless behavior and inability to see the bigger picture. Gustav states that Alfonse needs to learn that he can't risk himself to save every single person, as a King must consider what would happen should he fall. These questions weigh heavily on Alfonse, as he considers whether or not he's truly worthy to be King.

Eventually, when Hel invades again, Alfonse is warned by Gustav to not engage Hel. Despite this, Alfonse still leads the Order into battle, eventually coming into inflict with Hel. Before Alfonse can react, Hel places a curse on him, that he will die within nine days. Following this, Alfonse lives with the curse, while the Order tries to find ways to counteract the curse. However, Gustav seems to accept that Alfonse will be lost to them, disturbing Sharena and the others. Alfonse tries not to lose all hope though, that he will do whatever he can to help in his remaining time.

When Alfonse meets with Gustav again on his way to a conference, Alfonse is presented a dead branch from the King and is asked about whether he remembers it. Alfonse does not, to which Gustav ponders as he leaves. Once his nine days are up, Alfonse once again converses with Gustav, saying that he was at least happy to have these talks with his father before his time. Following this, before Hel can reap Alfonse's life, he watches in horror as his father takes his place, entrusting the future of Askr to him.

Following the King's death, the Order begins to travel to Hel itself. Along the way, Alfonse is forced to fight against a reanimation version of his father. Reluctantly but with resolution, Alfonse and the Order defeat Gustav, and make their way into Hel. While doing so, he comes into conflict with Hel and her generals again. When Hel tries to curse Alfonse a second time, he resolutely states that he will make use of his nine days to defeat her. Enraged, Hel retracts her curse, saying that she will make him suffer like he can't imagine. Following this, Alfonse and the Order chase Lif and Thrasir into a portal.

Alfonse and the others find themselves in an alternate Askr, one that has come to ruin with no survivors. After another encounter with Lif, Alfonse notices a bouquet of flowers that happens to be Sharena's favorite: a memorial. Alfonse suspects that Lif might be behind it, though to what reason he can't fathom. Desiring to explore the library of the ruined Askr, Alfonse faces an ambush by Lif. However, Lif's hesitation when Sharena faces him causes Alfonse's concerns to deepen.

Upon finding the alternate Askr's library, Alfonse discovers a potential clue to defeating Hel: a ritual called the Heart's Rite that was performed between Askr and Embla. However, this ritual decimated the nations, leaving them completely dead. As this happened, they came into conflict with Lif once again. Putting all the clues into place, Alfonse makes a deduction about Lif's identity.

A kind and serious man who is eager to maintain peace, Alfonse thinks of himself as not being the “prince” type, and joined the Order of Heroes even when Askrian people said it wasn’t royal-like and his father expressed outrage. He finds it hard to trust others, acting aloof towards the heroes and Kiran in part because of Zacharias “dying” in battle, as well as being heartbroken when another hero Alfonse had bonded with eventually left. As a result, he is reluctant to make connections with others, and regards those summoned as allies rather than friends.

Very knowledgeable, he usually provides background on many aspects of Zenith and the seasonal festivals, and was even shown to be a good artist at one point (even if his drawings are plain). He is also an able strategist, outwitting Surtr in order to let people escape their villages, and cornering Laegjarn by studying Nifl's geography.

Alfonse also shows some qualities of a quick thinker, as seen in Book II where he feigns defending a local village from an attack launched by Surtr where he actually evacuated the locals ahead of time by sending smoke signals.

Due to his serious nature, however, Alfonse often gets dismayed at the shenanigans of other members of the order, particularly Anna's schemes to earn money, and it also causes him to be uncomfortable with directly participating in festivals where dressing up is involved, as is illustrated in the second spring festival.

Prince of Askr
A prince of Askr and a member of the Order of Heroes. Kind and serious, and eager to maintain peace.

Alfonse is one of the Askran Trio that players of Heroes receives at the very beginning of the game. Of the three, he is the Sword wielder with solid physical bulk from his decent HP and Def and a solid Atk for powerful attacks. Unfortunately, Alfonse is hindered by low Spd, causing many units to easily double attack him with his 25 maximum at 5 Stars and a low Res stats makes him incredibly fragile to nearly all forms of magic attack. His legendary weapon, Fólkvangr, has an innate Defiant Atk 2 built in, making him stronger when he is under half health. This is strengthened to Defiant Atk/Def 3 when refined plus a Triangle Adept 3 effect, granting him incredible power when combating Green units, but will suffer against Blue units.

Sol is his attacking skill to keep him healed as he battles, but is not useful to him in the long run compared to better combat skills. Death Blow 3 gives him more Atk when he initiates, leading him to have a solid 57 base Atk on initiation allowing a single powerful blow against most units due to his low speed. Spur Atk 3 gives allies 4 bonus Atk when adjacent to him for a decent boost but incredibly situational.

Overall Alfonse is a fairly average unit, but suffers greatly due to a lack of merging since neither her nor Sharena and Anna can acquire additional copies. They also lack the ability to have Boons or Banes, preventing stat adjustments to better suit their stat distribution. He can be a general combat unit without his refine, but becomes a decent Green counter with it. Otherwise, Alfonse pales in comparison to numerous other Sword units in the game in the long run.

Alfonse has a plethora of counters. Any offensive Staff unit and Red/Blue Mage unit easily runs through his low Res and speed. Bulky blues can also shrug off Alfonse even without his refined weapon. If planning on using the Refined Fólkvangr, all Blue units can easily handle him while he deals pitiful damage on retaliation. Finally, while most Swordbreaker units already can double him without the skill, any unit with the skill is guaranteed to deal huge damage to him.

Fólkvangr is a decent weapon for him to use and using his Effect Refine for it is his best option to at least serve as a green counter. However if the huge loss towards Blue retaliation is too much, taking the flat Atk Refine is a decent option. Alfonse has two variations that make him either a tanky sword unit or a nuclear offensive unit.

The tanky variant desires his Fólkvangr Refine Effect using Fury to give him a flat boost to his stats while slowly whittling down his HP so he can enter the HP range for Fólkvangr, though players with access to Distant Counter gives him more options to retaliate against red and green mages and other range units. Moonbow or Bonfire helps him to cut enemy Def on activation or use his own to power up his attack respectively. Reposition is the standard Support skill on any unit. Swordbreaker allows him to eliminate the threat of common Sword units and give him the means to double attack against at least one weapon type. Finally Spur Def/Res is a decent option for ally Support in his Slot C.

His nuclear option focuses on Player turn offense. Refining Fólkvangr with an Atk Refine is the best option to prevent restriction from battling Blue units. Using Ardent Sacrifice or Reciprocal Aid manipulates his HP so he can get to his effect HP range faster. Since Alfonse is relying on buffs, Glimmer takes these boosts and pushes them further for his damage output. Brazen Atk/Def syncs with the Refined Fólkvangr's base effect to grant him great bonuses to his two strongest stats in combat. Death Blow can be maintained to a similar effect. Desperation grants him follow ups since he is maintaining his damage state. Finally any sort of Spur or Hone skill works well with him, though Threaten Defense can shred enemy defenses so he can output a little more damage if needed.

Spring Prince
A prince of Askr who's kind and serious. He's taking part in the spring festival as a member of the Order of Heroes.

Askran Duo
Siblings who, together, represent Askr's future. They have come to participate in the celebration and to make a resolution to keep up their hard work in the coming year.

Alfonse is a variation of Alphonse, an Old Germanic name meaning "ready for battle."

Alfonse is illustrated in the trading card game Fire Emblem Cipher with the following cards: 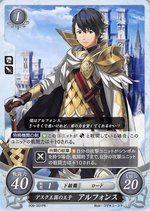 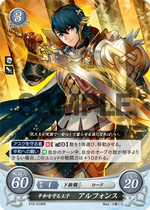 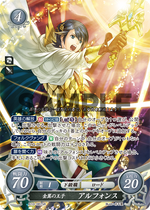 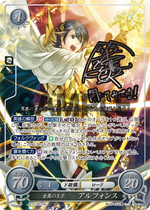 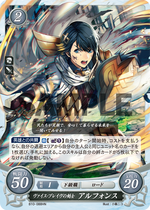 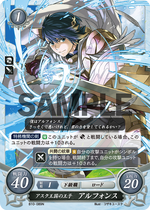 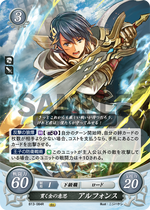 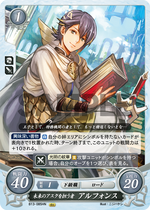 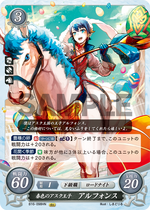 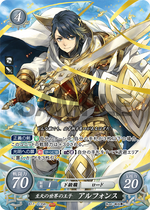 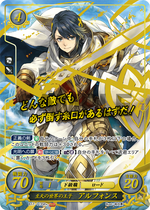