Berserker
[view]
“Go, my children! Make your master proud! And do it quickly. I am needed elsewhere... But I promise to linger long enough to see them suffer... Heh heh...”
—Algol to his Risen army in Death's Embrace

Algol (アルゴル Arugoru, Argo in the Japanese version) is an enemy boss character/ Secondary Antagonist from Fire Emblem Awakening. Algol is a Grimleal priest, and bandit.

He appears in Chapter 21, where he is tasked by Validar to prevent Chrom and his forces from escaping Plegia Castle. Despite the numerous traps set in place, Algol is killed in battle.

Algol also appears in the DLC Death's Embrace, where he dabbled in necromancy. He succeeded and managed to create loyal, unquestioning Risen by attacking villages and capturing the strongest of them for his own use. He is later confronted by Chrom and the Shepherds after they are notified by other villages about his actions. Algol sends his best Risen in addition to his masterpiece to fight them, watching the battle from afar.

After 10 turns, if he is not defeated, Algol will realize that the Shepherds are stronger then they look, reluctantly abandoning his temple and vacates the area. The player can kill him instead if they reach him before 10 turns pass.

Algol is the name of a trinary star system in Perseus. It is Arabic for 'winking demon', and is named for the fact that β Persei B regularly eclipses β Persei A, so that the star appears to periodically brighten and dim. 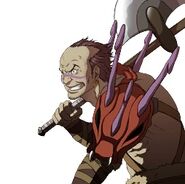