“No, it wasn't that. I just needed to understand... To understand why you couldn't love her... Why you were always so secretive... I needed to know who you really were.”
—Alicia, in a conversation with Alfred

Alicia (エリシャ Erisha) is a playable character from TearRing Saga: Utna Heroes Saga. She is an eighteen-year-old mage from the Temple of Trente. She is also the only character who is capable of wielding ☆Brenthunder.

At the age of four, Alicia first met Alfred when her mother, Nina, began nursing him back to health. For the next thirteen years, she viewed Alfred as her father. After her mother's death, Alicia left Alfred's side to seek information about his true identity and the reason that he never requited requite Nina's romantic feelings.

Alicia is introduced when she is imprisoned within a cell located in the Taurus Mountains. When the bandit leader Yazam orders his men to bring her to him, she refuses to defend herself due to a rule established by Alfred in which mages should fight only in the direst circumstances. However, Samson defends her, and the two of them are eventually reinforced by Holmes. After the battle, she convinces Holmes to allow her to join his group. If Maruju was sent with Holmes's army after the first route split, Alicia meets him and discovers that he is Alfred's son.

Later in the game, Alicia can have a conversation with Alfred in which she admits to understanding the reasons for his actions. Before they part ways, Alfred gives ☆Sylpheed to her, although she is hesitant to accept it.

In the ending, Alicia witnesses Alfred's reunion with his biological daughter, Mel, who notices her and asks if she personally knows him. After revealing her past with Alfred, she hopes that she and Mel can become friends. However, she declines Mel's offer to live in the Temple of Mars and returns to Marl, where she assists Tia for a while. She also agrees to aid in the revival of Leda, which was her mother's desire.

Alicia is the third mage to join the player's team. She benefits from her specialty in Thunder magic, since it is possibly the most useful magic type among the three major elements. She possesses fairly decent stats, though typical for a mage. She does have slightly lower Magic and Agility in comparison to Meriah and Rishel, making her slightly outclassed. Her exclusive tome, ☆Brenthunder, is one of the best magic tomes in the game due to its unique (among magic) double-strike feature. Even without it, she is a decent unit who can deliver a good punch of magic when needed. 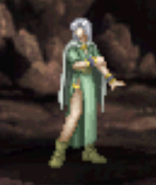 Alicia's battle model as a Mage. 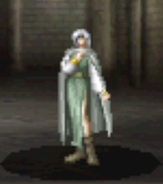