Almedha is a non-playable character from Fire Emblem: Radiant Dawn. She is the daughter of Dheginsea, the King of Goldoa. She is also the sister of Rajaion and Kurthnaga. She was Ashnard's de facto wife, and allegedly, Pelleas' mother.

Years prior to the events of Fire Emblem: Path of Radiance, she left Goldoa for Daein, where she grew close to Ashnard, becoming his mistress and bearing his son. Because she consorted with a beorc, she lost her laguz abilities shortly after giving birth. Ashnard had hoped that a half-dragon child would possess some kind of special power; when he learned that the child did not, he used his son`s life as bait to lure Rajaion, the Dragon Prince and Almedha's brother, to Daein. With his son a disappointment and Almedha stricken powerless, Ashnard grew to find her a nuisance.

After becoming separated from her son and estranged from Ashnard, Almedha continued to live a quiet existence in Daein. She remained outside of the public eye during the events of the Mad King's War, only to make a return to Daein's forefront after being informed that her long-lost son had returned. Queen Elincia asks her at one point if she knows why Ashnard had chosen to invade Crimea, but Almedha has no answer for her, as the last time she had spoken to Ashnard was over twenty years prior.

While under the belief that Pelleas is her son, Almedha all but forces him to follow her advice, all the while doting on him to an almost smothering degree. Having witnessed Ashnard's use of the Blood pact to attain power, she instantly recognizes the Mark of the Pact that manifests on Pelleas's arm. Nevertheless, she remains silent, terrified that, should she mention the means of breaking the pact, Micaiah would kill her son. Her worst fears are realized when Pelleas independently learns the way of ending the pact's power over Daein: he orders Micaiah to end his life.

In the Epilogue, if certain criteria are fulfilled, Almedha and her younger brother Kurthnaga discover that Soren, and not Pelleas, is her true son. These are as follows:

Almedha is an overprotective, aloof, and overbearing woman, so emotionally and mentally broken by all of her ordeals that she claims at one point that she would rather have all the people of Daein die than lose her son again. (Her son Soren incidentally shares some of her emotional nature, as demonstrated when he reveals his past to Ike.) Almedha also has an apparent distrust of Micaiah despite Micaiah's efforts in assisting Prince Pelleas during the fight to liberate Daein and the subsequent rebuilding of the nation. In particular, she appears to take offense to Micaiah's more adept handling of military and political matters that Pelleas struggles with.

Almedha is illustrated in the trading card game Fire Emblem Cipher with the following cards: 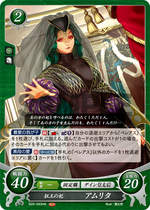 As a Spanish given name, Almeda is a transfer of the Spanish surname which is derived from Almeida, a habitational name from Arabic al-medina "the city". Its use has been influenced by Alameda, a topographic name from Spanish alameda "poplar grove", and ultimately by the Spanish word álamo "poplar". In the English-speaking world, Almeda is as much a borrowing of the Spanish name as it used to be the traditional "translated" form of a Welsh saint's name. Which saint exactly would have been Anglicized as Almeda is disputed by modern-day academics: the most popular theory opts for Eluned or Eiliwedd. Eliwood

Amrita, Amrit or Amata, is a Sanskrit word literally meaninh "immortality" and is often referred to in ancient Indian texts as nectar, ambrosia and carries the same meaning. Its first occurrence is in the Rigveda, where it is considered one of several synonyms for soma, the drink of the devas.

Almedha as a Queen Mother Daein in Fire Emblem 0 (Cipher).

Artwork of Almedha without her veil.

CG image of Almedha looking up at the sky.

CG image of Almedha wielding a sending stone as she gazes forlornly at the sky. 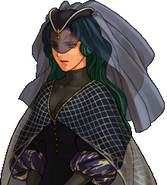 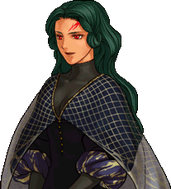