Teacher at the Officers Academy
One of the Knights of Seiros

Chapter 3: Mutiny in the Mist

Chapter 15: Tempest of Swords and Shields

Raymond K. Essel
[view]
“Captain Jeralt?! Goodness, it's been ages. Do you recognize me? It's Alois! Your old right-hand man! Well that's how I always thought of myself anyway.”
—Alois speaking to Jeralt

Alois is a character from Fire Emblem: Three Houses. He is a part of the Officers Academy and one of the Knights of Seiros. As an instructor at the Academy, he offers lessons in Axes and Brawling.

Alois was born in Imperial Year 1135, as the second born son of a merchant family. His parents died when he was young and he came to live at Garreg Mach Monastery. At the age of 11, he was discovered by Jeralt, who was then captain of the knights, and became his squire. He was officially knighted when he was 24 years old, though Jeralt disappeared that same year. Jeralt and Alois were reunited in Imperial Year 1180 in Remire Village when Jeralt, Byleth and his mercenaries saved students from bandits. He then recommended Byleth as a teacher to Rhea, something he rarely does, after witnessing them in battle.

At some point in time, Alois met and married his wife, and had a daughter.

If recruited by the player Alois joins the Black Eagle Strike Force during the Battle of Garreg Mach. After the battle he officially leaves the service of the Knights to search for Byleth who disappeared after the battle. After being reunited in Imperial Year 1185 he swears allegiance to them, believing that protecting Byleth is more important than being in the Knights of Seiros, to honor Jeralt's memory. After the war he retires from military duty to become a farmer in Remire Village with his wife and daughter.

If not recruited by the player Alois remains with the Knights of Seiros and believes Byleth is tarnishing Jeralt's memory, participating in a sneak attack on Garreg Mach. If Byleth faces him in combat, he proclaims that he cannot honor Jeralt's promise, and that he must kill and bury them with his own hands. However, he was unaware that Jeralt left the Knights of Seiros due to his growing mistrust of Rhea.

Boisterous, courteous, and upbeat, but a tad too excitable, Alois’ role as a knight has shaped him into a friendly and kind individual who is eager to help out others at a moment's notice. Due to this selfless need to help others, he often finds himself being taken advantage of. However, as Shamir points out, Alois' positive, cheerful nature strengthens those around him, as well as naturally making people at ease. Most notably he is one of the few people who does not frighten Bernadetta, who is skittish around everyone else.

He self-proclaimed himself Jeralt's right hand man, but this sort of closeness seems to be more one-sided on his part, but nonetheless greatly respects his former captain and is elated to meet him once again after many years apart. He forms a big brother relationship with Byleth as a result, promising to assist them in their endeavors out of honor for Jeralt.

He enjoys telling jokes using simple puns and visual aids to lighten up any dour mood. His attempts at comedy are met with silence due to their corny nature. Even Dimitri, the only person who genuinely laughs at his jokes, admits that it is because his jokes are bad that he finds them ironically funny. He also enjoys fishing, though he does not catch much due to his habit of talking loudly, and refuses to believe this is the problem.

Alois is your fairly typical Warrior with high strength and good physical bulk, but lackluster dexterity, speed, and resistance. What separates him from other axe-wielders like Caspar, Hilda, Dedue and Raphael is Alois' personal skill, Compassion, as well as his immediate access to Rally Strength, which give him more supportive capabilities than his contemporaries. He also has better Charm than all of the others except Hilda, but doesn't have Hilda's weakness in Authority.

Alois' low magic, shallow spell list, and weakness in Reason mean any magical classes are not advised for him, but he otherwise does well in the Brigand or Armored Knight lines. His weakness in Flying does mean that Wyvern Rider and Wyvern Lord are difficult to acquire, but he could make for a reasonably good Great Knight if trained in Riding. War Master is also a good class for him to promote to given his already-high skill levels in Axe and Brawling. He also starts out immediately with Healing Focus, which can greatly help his longevity in battles.

Alois' biggest problem, however, is that he is only recruitable once the player reaches Chapter 11. By this point, other axe-users may have surpassed him already, and his personal skill is situational compared to others. His growths also tend to be inferior overall to those of other axe-users, giving him worse scaling than his competition despite his starting stats.

Overall, Alois is a serviceable Axe-user who tends to be overshadowed by the other options. He's by no means weak, but will struggle to compete with the likes of Caspar, Hilda, or Raphael.

Once the long war against those who slither in the dark came to an end, Alois and his family moved to Remire Village and lived happily as farmers. It is said that from the moment he put down his sword and picked up a hoe, he never so much as thought about turning back.

Alois - Sun of the Knights (Other routes)

Once all the fighting had come to an end, Alois officially took up the position of captain of the Knights of Seiros. In this capacity, he was much beloved, and the Knights became more unified than ever under his command. It is said that their accomplishments during his tenure were beyond even what Jeralt's troop had achieved.

When all of the fighting was over, Byleth embarked on another wandering journey as a mercenary. He traveled all over Fódlan, following his father's steps. When he at last drifted into Remire Village, he was reunited with Alois, who had moved there with his family and was now living on a farm. On Alois's advice, he decided to stay a while, and before he knew it, five years had passed. He fell in love with a kind woman in the village, and they had a modest wedding. It is said that Alois was so overcome with emotion on that day that his weeping could be heard from anywhere in the village.

When all of the fighting was over, Byleth embarked on another wandering journey as a mercenary. She traveled all over Fódlan, following her father's steps. When she at last drifted into Remire Village, she was reunited with Alois, who had moved there with his family and was now living on a farm. On Alois's advice, she decided to stay a while, and before she knew it, five years had passed. She fell in love with a kind man in the village, and they had a modest wedding. It is said that Alois was so overcome with emotion on that day that his weeping could be heard from anywhere in the village.

When Byleth took on the role of archbishop in Rhea's place, he/she reformed the order of the church little by little. Eventually this included the Knights of Seiros, and Alois was named captain and the archbishop's right hand. The captain's duties kept him busily engaged all over Fódlan. His cheerful character inspired those under his command, unifying the Knights of Seiros in a way they had never been before. The archbishop relied on Alois as if he were his/her father, and Alois in turn treated him/her like his child. It is said that Alois was so overcome with emotion on the archbishop's wedding day that his weeping could be heard through the applause.

After the war, Byleth ascended the throne of the United Kingdom of Fódlan, and Alois retired from the Knights of Seiros to serve the former professor. Alois became the new leader's right hand, and his duties in that respect kept him busily engaged all over Fódlan, giving all he had to support his/her reign. Alois's cheerful character was beloved by his subordinates, who rallied behind him to create the most numerous order of knights in all Fódlan. It is said that Byleth relied on Alois as though he were his/her own father.

Mercedes left home for a life as a cleric at Garreg Mach. Alois, as Jeralt's successor, officially assumed the role of captain of the Knights of Seiros. Though the two were quite busy with their daily activities, they would often find time to get together in the evenings so Alois could hear Mercedes's ghost stories. No one can say for certain whether it was the constant exposure to spooky tales or some other cause, but from that time on, Alois's reputation became that of a totally fearless fighter. Mercedes's quiet support was widely credited for this increase in bravery. Her blessing came to be known as a guarantee of victory.

*Alois and Mercedes can still support in Crimson Flower but they don't have a paired ending there.

Leonie joined up with the mercenaries formerly led by Jeralt. As his greatest apprentice, she quickly took on a leadership role, and eventually even inherited the title of Blade Breaker. No matter where she went, however, she was burdened with Jeralt's unpaid tavern tabs. Angry with Alois for pushing these debts upon her, she went to see him with the intention of forcing him to pay half the debt. But when she arrived, she found a suntanned Alois happily lounging after a hard day's work on his family farm. Leonie found herself unable to go through with it. She did become a world-renowned mercenary, but she spent the whole of her career paying off debt.

Alois and Leonie (Other Routes)

Leonie joined up with the mercenaries formerly led by Jeralt. As his greatest apprentice, she quickly took on a leadership role, and eventually even inherited the title of Blade Breaker. No matter where she went, however, she was burdened with Jeralt's unpaid tavern tabs. Angry with Alois for pushing these debts upon her, she went to Garreg Mach to force him to pay half the debt. She encountered a smiling Alois, who had become captain of the Knights of Seiros, and who was all too happy in his new prosperity to take the debts back on. It is said that Leonie developed quite the drinking habit once she was free to visit taverns whenever she liked.

Alois officially took up the title of captain of the Knights of Seiros. In this new role, he led the knights to many victories, and was much beloved. At the same time, he developed a reputation for gullibility, and his subordinates began to play tricks on him regularly. To help him deal with this, Catherine volunteered her services as an adviser. She kept a look out for him, and put a stop to these antics before they began. The combination of the kindly captain and the intimidating wielder of Thunderbrand proved strong, and the Knights of Seiros prospered.

Alois is illustrated in the trading card game Fire Emblem Cipher with the following cards: 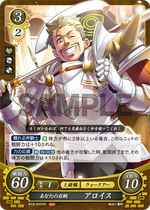 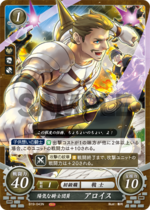 Alois, latinized Aloysius, is an Old Occitan form of the name Louis, which means "renowned warrior".

Artwork of Alois in Fire Emblem 0 (Cipher) by mineri.

Artwork of Alois in Fire Emblem 0 (Cipher) by mineri.

Alois as a Warrior in Fire Emblem 0 (Cipher).

Alois as a Fighter in Fire Emblem 0 (Cipher).

Alois's battle model as a Dancer. Done with the use of hacking.

Alois's battle model as a Fighter.

Alois's battle model as a Monk.