Altea (アリティア, Aritia lit. Alitia in the Japanese version; romanized as Aritia in Fire Emblem Museum) is an island kingdom on the continent of Archanea in the games Shadow Dragon and the Blade of Light, Mystery of the Emblem, and Shadow Dragon and is the country which the games' hero, Marth, hails from.

Due to its formation, Altea existed as a vassal state for Archanea and held great loyalty to the Archanean royal family. While the nation was fairly small, under Cornelius, and later Marth, its knights were known for being some of the most skilled on the Continent.

Originally little more than a rural province of Archanea, Altea became a kingdom through Anri, who was once a peaseant. During the War of Liberation, Princess Artemis fled to the region to take refuge from her country's domination at the hands of the Dolhr empire, where she and Anri met. Guided by Gotoh, Anri eventually departed for the Ice Dragon Temple to claim the Falchion and use it to slay Medeus, the Shadow Dragon, in order to end the war. Afterward, with the blessing of the princess, the Kingdom of Altea was founded from the islands, with Anri becoming its first king and the Falchion serving as it's national treasure.

The Kingdom remained stable until King Anri's death. Having never married and died without without an heir, he is succeeded by his younger brother Marcelus. This in turn creates an inheritance dispute that leads the country to be split in half, with the eastern half of the Kingdom belonging to Marcelus, while the western half secedes and under several nobles becomes an independent state, the Kingdom of Gra, which later became a close ally of Altea. From there, the Kingdom remains stable under the reign of Marcelus and his son Marius. On the death of Marius, his son, Cornelius, the father of Marth, was crowned king.

When Archanea is invaded by Dolhr, Medeus's kingdom, reformed after he is resurrected, it takes the arms to help its suzerain. Led by King Cornelius, the joined armies of Altea and Gra march towards the capital to break the siege, battling the Grustian army, led by general Camus. However, while Altea's victory seems to be at hand, Gra betrayed them mid-battle, killing King Cornelius, stealing Falchion and massacring the Altean army, with a severely wounded Cain being the only survivor of the battle, having been tasked to bring Prince Marth his father's last words.

At the same time, Gra attacks Castle Altea itself, having entrusted a garrison to Altea. With King Jiol himself leading the Prince's hunt, prince Marth is forced to flee Altea with a retinue of knights, while Princess Elice stays behind to buy him time and Frey acts as a decoy to throw Gra's army off, allowing Marth to take refuge in Talys. This would eventually lead to Elice being abducted by Gharnef, and Queen Liza getting killed by Morzas of Dolhr.

Two years later, Marth begins to gather a resistance army to respond to the call of Princess Nyna, the last survivor of the Archanean royal family, who tries to rebel against the empire. With his army, Marth goes from battle to battle, releasing Aurelis and Archanea in the process. After meeting Princess Nyna, she gives him the shield of seals in order to officially make him the champion of Archanea. The Archanean league, initally composed of Altea, Aurelis, and the remnants of Archanea, proceeds to defeat Gra, avenging their betrayal, releasing Khadein from Gharnef, and recapturing Altea, then led by Morzas, a lieutenant of Medeus, and toppling Dolhr's grip on the continent. From there, the League overcomes the Kingdoms of Grust, Macedon and the Empire itself. Once Marth recoveres the Falchion and defeated Gharnef, the prince eventually slay Medeus, freeing the continent of Archanea.

Three years later, while Marth and the Altean knights are deployed by the Archanean empire in Grust and Macedon to investigate and dispel alleged uprisings, the Archanean army under the command of Emperor Hardin invaded and conquered Altea during his absence, with Elice being abuducted by Gharnef, who bought time for Caeda to escape and find Marth, sparking the War of Heroes.

Despite the Altean trying to return to Altea, but Archanean's imposing army forces them to flee. Marth is eventually forced to take a lengthy detour by following Anri's footsteps by travelling to the Ice Dragon Temple, where he learns about the Shield of Seals from Gotoh and is entrusted with its restoration. The army would then later return to Altea and reclaim it for the second time. From there, the Altean army marches on Pales, killing Emperor Hardin and restoring him to sanity, while restoring the Shield.

Learning of Gharnef's second resurrection of Medeus. The Altean forces travel to the Dragon's Altar and kill Gharnef, while defeating Medeus a second time, ending the War of Heroes.

After the War of Heroes, Marth marries Caeda and is briefly crowned the king of Altea. However, shortly afterwards, the heirs of the other kingdoms surrender their nations to his rule, and Altea was merged with the other nations of the continent, creating the Archanean Alliance, with Altea itself coming under the protection of a newly-formed elite brigade of Temple Knights.

Altea would eventually become part of the border between the Haildom of Ylisse, and the Theocracy of Plegia

Hollyhock was part of the official seal of the Tokugawa Shogunate. Rose of Sharon, whose proper name is 'hibiscus syriacus,' is the national flower of South Korea and symbolizes immortality. In the Christian Bible, the phrase 'Rose of Sharon' is the translation from Hebrew given to several unidentifiable flowers and has become a common poetic reference in English literature. Sharon is a plain on the Western side of Israel between the Samarian Hills and the Mediterranean Sea. Also Altea is a Spanish town on the Mediterranean coast. 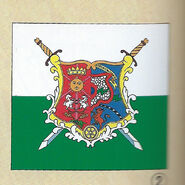