You may be looking for the character of the similar name, Altina.

Chapter 8: Dragon Knights of Thracia [Joins in Chapter 9: For Whose Sake] (Genealogy of the Holy War)

Dragon Knight (Genealogy of the Holy War and Thracia 776)

Morgan Berry
[view]
“I'm sorry, father... but hear what I have to say! How do you ever expect the citizens of Thracia to be content thriving off the blood and sweat of other nations? ...Your ways leave much to be desired, father.”
—Altena to Travant in Genealogy of the Holy War.

Altena is a playable character from Fire Emblem: Genealogy of the Holy War who makes several minor appearances in Fire Emblem: Thracia 776. She is the daughter of Quan and Ethlyn, as well as the older sister of Leif. Being a direct descendant of Crusader Njörun, she inherited the ability to wield the Gáe Bolg from Quan. She is also a descendant of Crusader Baldr from her mother's side. In addition, she is the granddaughter of Calf, Alfiona, and Byron, the niece of Sigurd, and a cousin of Seliph. She is also an indirect descendant of Dain and distantly related to Travant and Arion, with Travant adopting her after the death of her parents by his hand.

At the age of three, Altena was kidnapped by Travant after his murders of her parents in the Aed Massacre. She was raised by Travant alongside his biological son, Arion, and eventually became a full-fledged Dragon Knight with the ability to wield the Gaé Bolg.

Altena is first seen when she receives orders from Travant to seize Munster, soon after the death of Bloom at the hands of Seliph's army. While she initially protests due to her desire to avoid harming civilians, she reluctantly obeys and begins to assist Coruta in their mission. Once they reach the mountains south of Manster, Altena attempts to stop Coruta from fighting, thinking that she can convince their enemies to surrender. However, Coruta reveals that he was instructed to ignore Altena and proceeds to attack. After the battle, she returns to the capital of Thracia, where Travant expresses his disappointment caused by her disobedience.

Later, during her mission to retake Mease Castle in Chapter 9, Altena encounters Leif, who reveals the truth of her heritage. Once she looks into his eyes, she begins to believe him and decides to return to Thracia Castle to ask Travant about it. Upon learning the truth, she attempts to kill Travant, but Arion interrupts her and knocks her out. After Travant's death at the hands of Seliph's army, she regains consciousness and tries to convince Arion to call for a truce. However, she ultimately fails and ends up defecting to Seliph's army, where she is placed in opposition to Arion.

In Chapter 10, Leif cheers up Altena when she is in low spirits as a result of worrying about Arion, who has been taken by Prince Julius. During the Final Chapter, Altena encounters Arion once again and successfully convinces him to defect from Grannvale's services and fight alongside her.

In Thracia 776, Altena is introduced alongside Travant when they send an army to attack General Hannibal's mansion, mistakenly thinking that it is occupied by bandits. Later in the game, she travels to Tahra in order to give Arion's Dragonpike to Dean. She asks Dean to use it to protect Arion's fiancée, Linoan. In Chapter 23, she appears as an enemy unit who cannot be recruited or defeated by the player. Once Coruta and his battalion begin their attack on Manster, Altena leaves the battlefield.

After the liberation war, Altena aids Leif in the reconstruction of the united Thracia Peninsula. It is mentioned in Thracia 776 that she is emotionally devastated as a result of the war, and for this reason, she is comforted by her loyal knight, Eda.

Altena is a kindhearted and strong-willed woman who shares her mother's brazen nature. Unlike Arion, she is unwilling to go to any length to fulfill Travant's orders and instead openly opposes him at times. Coruta describes Altena as being "too soft". It is stated that she has always been there for Coirpre like a mother. She shares a close bond with Arion, and is very reluctant to fight against him, even after learning the truth about her heritage. In her conversation with Finn in Chapter 9, it is revealed that Altena always desired to have his attention during her early childhood.

In Chapter 9: For Whose Sake, speak to Altena with Leif before defeating Travant. She will then return and seek Seliph's audience. Finn must be alive when she is recruited. She will also disappear if Seliph captures Grutia before she can talk to him.

Notes: Parent characters are assumed to be at Level 30 by the end of the First Generation. Unlike most female children, Altena inherits the equipment of her father, Quan, instead of her mother.

Altena is the only playable Dragon Knight in the game, as well as the only flier in the second generation aside from Fee/Hermina. In contrast to them, she is not particularly fast, despite her high Speed growth, but she has far superior Strength and Defense. While the Gaé Bolg gives her very high physical Attack (the highest in the game if she is holding the Power Ring), she is rather frail, due to her very poor Resistance and the prominence of enemy mages and archers/bow knights in the last two chapters. Like Shannan and Febail, she is a common target for Sleep Staves, which can make using her rather tedious at times, as she will need to be frequently cured by a healer.

She has a powerful set of skills, including Critical and Adept, and learns Pursuit upon her promotion to Dragon Master. This means that her offense will always be excellent, likely very close to the best among the physical attackers in the game. Because of her Resistance issues, it is recommended to give her the Barrier Sword as a second weapon (note that this can only be done if Laylea is recruited instead of Lene).

One unusual trait of the Gae Bolg is that, unlike in most games, enemies in Genealogy will not attack if they are facing a target with very high Defense. As Altena can frequently have 30-40 Defense, many enemies will not even attempt to attack her while she has it equipped. While this is helpful on its face, it can be irritating, as it means she is mostly forced to wipe out squads of enemies one at a time.

Depending on whether or not the player is concerned with Arion's survival in the Final Chapter, she will either see very little combat after his recruitment, or she can lead him into battle. The second option can provide the player with some useful bait (particularly the generic Dragon Knights, as the enemy will typically target them).

Thanks to the Gáe Bolg granting +10 to Strength, Altena has the distinction of having the highest possible attack power of any of your units, tying with Febail when he wields the Yewfelle. With a Power Ring, her base attack with the Gáe Bolg is 72. Julius's Loptous halves that down to 36, meaning she deals increments of 11 damage to Julius, far more than any other unit - Shannan, Seliph, and Ares all do increments of 6, 5, and 4 respectively (that's with a Power Ring; without, they're stuck at 1 like everyone else). If you don't use Julia, Altena and Febail are your strongest units to kill Julius. On the other hand, Seliph and Ares gain the benefits of having substantive Resistance, meaning they're not afraid of dying to Julius. Altena should have enough hp to tank one hit from Loptous, but be sure to bring Seliph and units with Charm to boost Altena's Avoid.

In Chapter 9, if Finn is alive at the beginning of the chapter and Leif speaks to Altena, she will leave the battlefield, and can be recruited later on.

In Chapter 9, after Travant is defeated, Seliph may recruit Altena by speaking to her.

In Chapter 9, after Grutia Castle is captured, either Finn or Hannibal may speak to Altena, and she will gain three points of HP. Note that if one of them has initiated his respective conversation with her, the other will not be able to speak to her.

In Chapter 10, if Leif speaks to Altena, she will gain one point of Luck.

In Chapter 10, after Miletos Castle is captured, Coirpre may speak to Altena, whereupon she will gain five points of Resistance.

In the Final Chapter, after Freege is captured and Arion makes his appearance, Altena may speak to him to turn him and his group into allied NPCs.

Altena is unable to fall in love with any of the other characters. Despite this, she is featured heavily in the Jealousy system, often placing high in many of the male characters' priority lists.

Luminous Rider
Daughter of Quan and Ethlyn, and inheritor of the Gáe Bolg. She was raised by her family's enemy, Travant. Appears in Fire Emblem: Genealogy of the Holy War.

Altena is illustrated in the trading card game with the following cards: 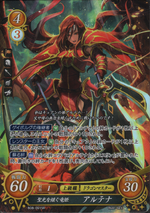 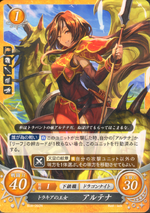 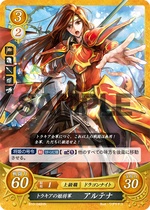 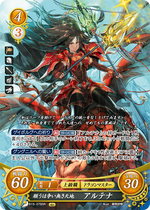 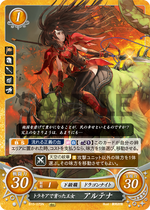 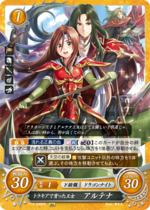 Altena is a corruption of the name for the Greek deity Athena, goddess of wisdom and war. Her Roman counterpart is Minerva.