Krizia Bajos (Heroes)
[view]
“We give you our solemn oath: never again will either the laguz or beorc seek the extermination of the other.”
—Altina

Unbeknownst to them, Lehran's communion with the goddess would eventually resurface in Altina's granddaughter Yoram, granted by having his bloodline. Successfully predicting the coming of a great famine in Begnion, she was hailed for her ability to hear the voice of the goddess and became the first of Begnion's apostles, unaware of the true origins of this power, as it led to the reorganization of Begnion into an empire. It also caused to a rumor to spread that Altina is the only person capable of awakening Yune through the Galdr of Release. However, this is proven to be false, as the galdr can only be sung by the firstborn of each generation of her descendants. Such confusion likely came about due to Altina's own name becoming the surname of her lineage, although very few in Begnion were ever aware of this fact.

Altina immediately enters the battlefield with impressive Atk and decent overall bulk especially as a Sword Flier unit. A few months later, she won the A Hero Rises 3 event, thus became a free unit for all players of Heroes, making her an easily accessible and powerful asset to all players to use. As an Astra Mythic Hero who boasts Atk Mythic Effect, she is a strong Aether Raids unit during Astra seasons and incredibly useful for most PvE modes. While her Spd is low, and often a point of contention for some of the most successful units in Heroes, it works to her favor mainly due to her powerful build that works around that.

Her base kit alone is solid enough that few will change any of them, which makes her fairly predictable when choosing units to counter her. Her Spd is still exploitable as a vast majority of the cast has enough Spd to double even against a Spd Asset Altina. Those who have enough physical bulk, mainly blue who can make use of the color advantage can take her two hits and can return in tow. High Def blues like Lukas, Mordecai, and Forsyth can effectively take her two attacks and can even double against her so long as she does not have a Spd Asset. Firesweep weapons and Dazzling Staff attacking units can outright cancel her ability to attack, thus are considered her most potent counters as her threat is immediately negated without her ability to counterattack, even in Vantage range. She is also vulnerable to most niche Panic and Ploy users due to her decent HP and Res, but can avoid some of the lower end users. 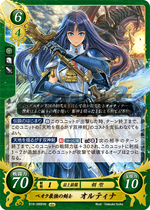