Chapter 5: The Empire's Reach (joins in Chapter 9: Distant Blade (Eirika)/Fort Rigwald (Ephraim) or Chapter 13: Hamill Canyon (Eirika) if she was not recruited or killed in Chapter 9 in Eirika's route)

Natalie Lander
[view]
“When I was just a child, she was stolen away by bandits. My father had already passed away, so I was totally...sniff...”
—Amelia talking about her mother in a support conversation with Duessel.

Amelia is a playable character in Fire Emblem: The Sacred Stones. She is an orphan from the small Grado village, Silva, and is a young girl who is inexperienced in combat.

Amelia's motivation to join the Grado army stems from her broken childhood, where her village Silva was attacked by bandits. Her father was killed in the raid and her mother, Melina, was kidnapped and presumed dead by Amelia. After this event, Amelia vowed to be the greatest soldier Grado will ever behold in order to protect her loved ones.

She first appears in her new residence, Serafew, where one of Eirika's companions or Eirika herself visits her house just as she leaves, finding a Torch that she had dropped in her rush to join the army.

At first, she is merely one of Grado's forces fooled by the propaganda declaring the siblings Eirika and Ephraim evil nobles of Renais, but when encountering them or the cavalier Franz, her opinion quickly changes and she defects to their side. She then aids Eirika and Ephraim in their journey.

Amelia is the second Trainee unit you can recruit. She has extremely low base stats for her join time and, opposed to what one would expect, her growth rates are comparably low as well. This leads to training her being a rather difficult and tedious task as she gets easily killed by most enemies (aside some weak monsters like Revenants) and deals little damage in return. Furthermore, she starts with 4 movement, meaning she has a hard time getting around a map without being ferried around by other units or reaching weakened enemies to finish them off. One good thing is the fact that she begins with a Speedwing, and if used on her she is able to double most enemies, adding that little damage that can defeat the already weakened enemy.

Her branching options for promotion vary in performance, but none in particular allows her to shine above the plethora of other units that likely already exist in the army. The Paladin route is her best possible option simply for the movement enhancement, though she will be facing stiff competition against a host of other Cavalier units that already exist and are likely more and better trained than Amelia once she catches up, most notably Seth. In the General route, her only competition is Gilliam whom she has slightly better Skill and Speed, but he has better overall bulk and strength. The class' low mobility hinders her a bit, but the additional bulk is useful for creating choke-points which Gilliam, if already trained, already does better. The latter class option may be more favorable despite the mobility issues due to the unit type saturation with the former.

Amelia is statistically the weakest character in game and takes a while to be brought to the same level as her fellow teammates, but she can be worthwhile to train for those who specifically wish to use her, but time and effort must be specifically funneled into her to be remotely competent. It is possible to achieve this as soon as she is recruited if wanting to get an early start, but it remains an issue of focusing valuable experience and resources into her that most existing units of both her promotion options could benefit from with far more time to start and far less effort to bring to the same, if not better results that she can produce.

Rose of the War
A young soldier from a small village in Grado. She is honest and sincere. Appears in Fire Emblem: The Sacred Stones.

With Ephraim
Ephraim: You're a Grado soldier? But you're just a child.
Amelia: I am not a child! I'm a soldier of Grado, and I will defeat every soldier of Frelia I meet!
Ephraim: Is that so? Guess I'm ready then.
Amelia: Um...
Ephraim: Is that the stance you're going to use? You'll drop your lance that way. I'm Prince Ephraim of Renais. Why don't you surrender and come with me?
Amelia: Wha-what are you going to do to me?!
Ephraim: Calm down. As long as you don't try to stab me, I won't do a thing to harm you.
Amelia: You lie! You're a liar! Everyone knows about Prince Ephraim of Renais. He's a beast who attacks any woman he sees...
Ephraim: .....Right, this has gone far enough. I am not going to hurt you. If you're scared, throw down your weapon and run away. But...if you're willing to listen, I'd like to ask for your help. You must realize this whole war is madness, right? Something is wrong in Grado. (Ephraim leaves)
Amelia: ..... I-I'm...

With Franz
Franz: You...You're a girl?!
Amelia: Ah! Don't make fun of me! I'm a soldier of Grado! Prepare yourself, Frelian dog!
Franz: W-wait a minute!
(Amelia trips)
Amelia: Oof..
Franz: Are, are you all right? It's not surprising you fell over from that stance. Can you get up?
Amelia: Sh-Shut up!
Franz: Did you hurt your knee? I know how it feels. I did it often as a recruit myself. To be honest, I still do it more than I should.
Amelia: .....
Franz: I'm Franz. I'm a Knight of Renais. What's your name?
Amelia: I'm Amelia.
Franz: Do you think I could ask you to surrender? This may be odd, but I really have no desire to fight you.
Amelia: .....
Franz: I get the feeling you don't want to fight either. Am I right?
Amelia: I... B-but...I've heard prince Ephraim takes females prisoners and uses them as palace slaves. If I surrender, will I be forced to work in the palace, too?
Franz: N-no, don't be silly! Prince Ephraim would never do such a thing...I think..
Amelia: You think?
Franz: No, he wouldn't! Of course not. You have my word of honor.
Amelia: ...Well, you seem sincere. I'll trust you, Franz.

With Eirika
Eirika: Who are you?
Amelia: What? What?
Eirika: Are you from around here? You should find someplace to hide. These men are after me. It's not safe.
Amelia: But... But I'm...
Eirika: Yes?
Amelia: I'm a Grado soldier. I'm here to stop the princess of Renais...
Eirika: Huh? You're with Grado?
Amelia: And you're Princess Eirika? But the commander said Eirika's a cruel and merciless fiend...
Eirika: What? No, I'm... I don't know what Grado's officers have been telling you, but... Our two countries are at war, so I suppose they can say what they want.
Amelia: ...Mistress Eirika...I, uh, I surrender. I won't fight you.
Eirika: Huh?
Amelia: I became a soldier because I admired General Duessel's sense of honor. But the general has been very opposed to this war from the beginning... And now I see you, and you look so sad about all of this. I don't know what's right anymore. I'm just a soldier, but I want to decide for myself. I want to understand the truth myself, to see it with my own eyes.
Eirika: ...I see. So...does this mean you're coming with us? I suppose I should ask your name then.
Amelia: Amelia. Amelia of Silva.


With Franz
Franz: Oh, who are you?
Amelia: What? What?
Franz: Are you one of the locals? This is a dangerous spot. You should hide. Here, come with me.
Amelia: But... But I'm...
Franz: I'm Franz, a Knight of Renais. What's your name? What are you doing here?
Amelia: I-I'm Amelia. I'm... Actually, I'm a Grado soldier. I'm supposed to be fighting you.
Franz: Really? So, uh, you're my enemy?
Amelia: ...I guess... Are you... Are you going to make me your prisoner?!
Franz: No! No, I wouldn't do that. But...this is a problem.
Amelia: What should we do?
Franz: First of all, you must listen to me and do as I say. We'll talk to Princess Eirika later.
Amelia: What? NO! My commander told me Eirika's a cruel and merciless fiend who--
Franz: Oh, that's utter nonsense. I've never heard the princess utter an unkind word to anyone. I understand why you're frightenened. You think we're the enemy. But if you'd only trust me... Will you come with me?
Amelia: Mm... Well, all right. I'll trust you, Franz.

Gheb: Y-you wench... You're that recruit, aren't you? Do you think you can betray me and get away with it?
Amelia: Your threats no longer hold any power over me. I-I am not your pawn!

Amelia, Rose of the War (戦場の花 Senjō no hana lit. Flower of the Battlefield)
"Following the war, she returned to Grado to assist in her country's reconstruction. She surrounded herself with new friends and used the strength she found on the battlefield to live her life in happiness."

A Support with Ewan
"After the war, Ewan and Amelia set out, as promised, on a trip around the world. Their deeds along the way made small legends in the regions they visited. In time, Amelia gave birth to a daughter, and they settled down."

A Support with Duessel
"Upon their return to Grado, Duessel reunited Amelia with her mother. The two wept with joy, giving thanks to Duessel. Afterward, Amelia became the most trusted companion of the man once known as Obsidian."

A Support with Ross
"Amelia traveled to Ross's hometown, where she decided to remain. Over time, the two fell in love and were wed. Years later they had a son who grew into a warrior. As he grew in skill and strength, he surpassed even his father."

The name Amelia comes from either of two names: Amalia, a Germanic name derived from the word 'amal' (work) or Emilia, which derives from the Roman family name Aemilius, which comes from the word 'aemulus' (rival). The birth defect 'amelia' refers to an absence of a limb, from the Greek 'a' (none) and the word for 'limb'. The name Amelia also bears a strong resemblance to the French verb "améliorer", which means "to improve".

Amelia is illustrated in the trading card game Fire Emblem Cipher with the following cards: 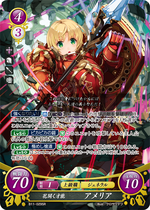 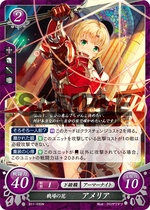 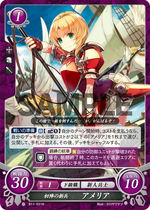 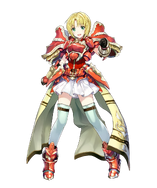 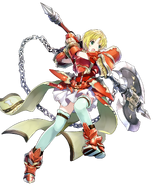 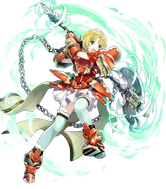 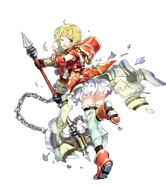 Artwork of Amelia in Fire Emblem 0 (Cipher) by Tetsu Kurosawa.

Amelia as a General in Fire Emblem 0 (Cipher).

Amelia as a Knight in Fire Emblem 0 (Cipher).

Amelia as a Recruit in Fire Emblem 0 (Cipher).

Amelia as a Paladin in Fire Emblem 0 (Cipher).

Amelia's portrait in The Sacred Stones

Amelia performing a critical hit as a General with a sword

Amelia as a Paladin with a sword

Amelia's attack animation as a recruit 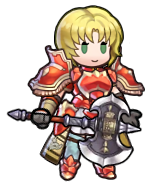