Wind Mage
[view]
“Look, just stick with me and you'll be fine. If an enemy shows up, get behind me, okay?”
—Amid

Amid is a character from Fire Emblem: Genealogy of the Holy War. He is the substitute character of his cousin Arthur if Tailtiu was not paired up. He is the son of Ethnia, and the nephew of Tailtiu. Once promoted, he is the only playable male Mage Fighter in the game.

Similar to Arthur, Amid is also looking for his sister, who in this case is Linda. He has minor Thrud Holy Blood and comes with a wind tome.

Amid is shown to be witty and somewhat cocky, enjoying teasing people such as Hermina. He is also suggested to be strongly dedicated to his sister, going so far as to travel across the continent on the rare chance that he might somehow find her.

Amid starts off fairly well for a substitute character, having Adept and wind magic at his disposal right from the get-go alongside minor Thrud blood for higher than average growths, however Amid simply cannot match up to Arthur due to one main reason: his class. Amid is of the Mage Fighter class while his counterpart is of the Mage Knight class which is mounted as opposed to the former, and unlike his sister Amid cannot wield staffs. This makes Arthur far more valuable for his movement alone, additionally while Adept is a nice skill it's very unreliable compared to Arthur's far more dependable Wrath skill. Depending on his Father, Arthur can also have pursuit and a higher magic stat, or even inherit Forseti. Come endgame and Amid will seldom see combat and will likely be overshadowed by Ced/Hawk with his solid magic stat and wide range of tomes and staffs, as well as his sister with her higher skillset and staff usage.

In Chapter 6, Amid may speak to Seliph, but nothing will result of it.

In Chapter 7, Amid may speak to Linda to recruit her.

In Chapter 8, Amid may speak to Fee/Hermina, and she will gain three points of HP and 100 love points with Amid.

In Chapter 8, if Amid moves to a certain spot in between the mountains, he may speak to Jake, and Amid will gain three magic defense points.

In the Final Chapter, if neither Amid nor Linda has a lover, Amid may speak to her, and she will gain a point of luck.

Amid is illustrated in the trading card game with the following cards: 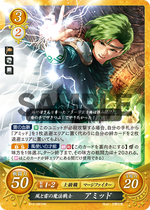 Amid is a corruption of Airmed, a deity from Irish mythology.