amiibo (アミーボ) are a line of interactive figurines available for usage with compatible software for Nintendo platforms beginning with the Wii U and Nintendo 3DS.

amiibo are a line of collectible figures or cards featuring numerous Nintendo characters from various franchises. The series debuted on November 21, 2014 with the Super Smash Bros. for Nintendo 3DS and Wii U line of amiibo. Using near field communication via the sensor within the Wii U GamePad, Nintendo 3DS amiibo adapter platform, New Nintendo 3DS touch screen, or Nintendo Switch JoyCon, scanning an amiibo unlocks special content in numerous Nintendo video games. The bonus each amiibo unlocks depends on the game which they are scanned in. Some only unlock generic bonuses in-game while others may unlock unique content. Several amiibo also have the ability to save special data within the amiibo's internal storage.

Upon scanning a Marth, Ike, Robin, or Lucina amiibo, the scanned character will appear as an NPC wandering the player's My Castle in the south. Like other My Castle features, the visiting amiibo character will activate a short event then disappear. Players will need to complete a map in order to resummon the amiibo character again. All other amiibo aside from the four mentioned have no compatibility with Fates.

The first two scans with an applicable amiibo will gift the player an Accessory only available to that character. The answer the player gives to them will determine which one they give.

Each amiibo provides two exclusive accessories that are unique to them. These accessories cannot be gifted to other players. They also have a variation of their signature weapon that is visually the same but with greatly reduced stats and bonuses.

Echoes introduced the first Fire Emblem specific line of amiibo with Alm and Celica receiving amiibo. Upon acquiring a Mila's Turnwheel, players can scan Alm and Celica to unlock a special dungeon. Alm's unlocks Duma's Ordeals while Celica's unlocks Mila's Ordeals. Both reward the player with special equipment when cleared. Additionally, players can copy the data of their current file's Alm and Celica stats onto the amiibo in order to summon them as illusory allies in battle.

During a battle, players can use Alm or Celica to summon an allied Illusory character using the amiibo art command. Summoning Illusory characters will cost Alm or Celica 10 HP per use. The illusory ally summoned is determined whether or not the amiibo is a Fire Emblem series related amiibo or not. Illusory allies are highlighted by their white-blue coloration. However, they are treated as an Ally character and cannot be commanded. The summoned allies will last until they are either defeated or the end of the Ally turn.

While amiibo can be summoned multiple times during a battle, the player cannot use the same amiibo twice in the same battle. Each turn, the player is allowed to use a different amiibo to summon another ally. Additionally, once the two armies are combined, only one amiibo can be used per turn. For example, if Alm uses a Mario amiibo and Celica attempts to summon an illusory ally using Luigi, the allies summoned by Alm will disappear and be replaced by Celica's summoned ally.

Using any of the Fire Emblem amiibo from the Super Smash Bros. for Nintendo 3DS and Wii U line of amiibos or an Alm or Celica amiibo with data copied onto them will summon an illusory version of that unit. Like the Fates summoned amiibo units, they come with a fixed inventory, including their signature weapon which cannot be removed from their inventory.

Using a Chrom, Tiki, or Byleth amiibo or any non-Fire Emblem series related amiibo will summon a generic Illusory Unit. These Illusory Units are completely random upon each summoning and can be a generic human unit or Terrors. Hence, a Mario amiibo might summon Barons the first time he is used, but on the second time, he might summon Bow Knights instead. Anywhere from one to three units may be summoned per use.

Three Houses is compatible with amiibo through a feature called the amiibo Gazebo. Scanning any amiibo causes random consumable items, seeds, and gifts to appear around the Gazebo. These are highlighted green. In New Game+, a new area called the Holy Tomb is unlocked, granting even more items and Byleth gains a new skill called Sothis Shield.

If a compatible Fire Emblem amiibo is scanned, classic map and battle themes from previous Fire Emblem titles can be used during auxiliary battles.

Each Fire Emblem amiibo will unlock a specific song:

Warriors is compatible with all amiibo, both Fire Emblem and non-Fire Emblem related.

If Chrom and Tiki amiibo are used for the first time, the player will be granted Chrom's Training Sword and Tiki's Tear, respectively. Afterward, they will function the same as the other Fire Emblem amiibo.

Scanning any Fire Emblem amiibo into the game and the two mentioned above after their initial scans will reward specific weapon types. Marth, Alm, Celica, Ike, Roy, Chrom, Lucina, and both Corrins unlock a Sword. Robin will unlock a Tome. Tiki will unlock a Dragonstone.

Using a Byleth amiibo or any non-Fire Emblem series related amiibo will grant the player a random material, a random weapon, or a random amount of gold. Up to five different amiibo can be used per day and each amiibo can only be scanned once per day.

Three Hopes is compatible with all forms of amiibo, both Fire Emblem and non-Fire Emblem related.

Any amiibo can be scanned in game in the Bonuses option in the menu, rewarding players with random weapons, items, or gold. There are no unique bonuses like in Warriors if a specific Fire Emblem amiibo is scanned. However, scaning any Fire Emblem amiibo raises the chance of getting better quality weapons and items or a higher amount of gold compared to using a non-Fire Emblem amiibo. Players may scan up to 5 unique amiibo per day.

Outside of the Fire Emblem series, Fire Emblem related amiibo can be used in certain games with unique effects. Majority of amiibo compatible games give the player generic bonuses when scanned. A few games have unique benefits when specific Fire Emblem amiibo are scanned.

The following is a list of unique effects that Fire Emblem amiibo give in other Nintendo games. 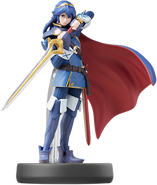 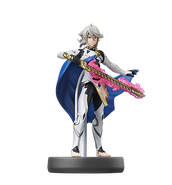 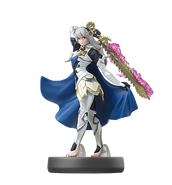 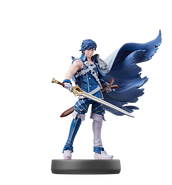 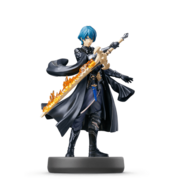 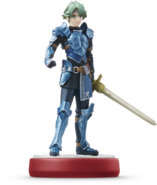 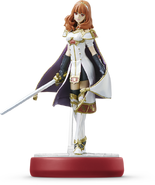 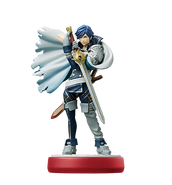 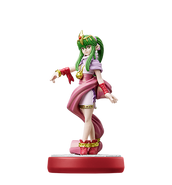