Amiti (アミーテ Amīte) is a personal Sword that hails from the Tellius Series of Fire Emblem. The royal sword of House Crimea, Amiti is solely bound to members of the royal family of the Crimean monarchy.

Because of this, the only playable characters who are capable of wielding the sword include Elincia, the princess of the deceased King Ramon and subsequent queen of the country, and Renning, Ramon's younger brother and Elincia's uncle.

To this end, however, throughout the course of Radiant Dawn, it is impossible for Renning to equip Amiti, as it is firmly locked within Elincia's inventory.

Amiti doubles every attack that its wielder is normally able to perform, in an identical fashion to Brave-type weapons. Apart from this, the sword also provides bonuses of +3 to its wielder's Defense and Resistance while equipped. Elincia receives this sword as part of the main story.

Although not explicitly referred to, Amiti is first introduced in Chapter 26 of Path of Radiance, where it, alongside Elincia's great grandmother's pegasus steed and Armour, is bequeathed to Elincia by Lucia, Bastian and Geoffrey, in turn granting her the ability to join in the fray of battle.

In Radiant Dawn, the Amiti blade is re-introduced in the Endgame chapter of Part 2, where Elincia, prior to leading the Crimean loyalists in an attempt to quell the rebellion staged by Ludveck, draws it from its resting place for use in the ensuing battle. All subsequent appearances of the character will see the Amiti blade remaining as a permanent fixture in her inventory, functioning as her weapon of choice.

The name of Amiti most likely originates from the Latin word 'amicitia', one that functions as the root of such words like 'amitié' (French for 'friendship') and the English 'amiable', both of which are attributes that define Elincia's character - Demure, polite, respectful and loyal to her companions. 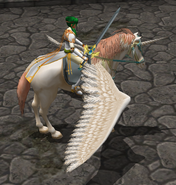 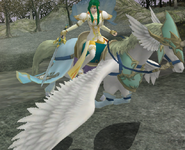