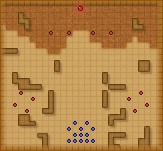 Chapter script
[view]
“The Ylisseans go to the Dragon's Table to retrieve the Fire Emblem, but the ritual to resurrect Grima is already underway. They break through and head for the altar.”
—Opening Narration

An Ill Presage (滅びの予兆, Horobi no Yochō lit. Omen of Destruction in the Japanese version) is Chapter 22 of Fire Emblem Awakening. This chapter takes place in The Dragon's Table.

In this chapter, Chrom's Army faces Aversa, who leads the 12 Deadlords. Five of them wield the holy weapons of Jugdral while the others wield Brave weapons.

The Deadlords, classes, and weapons are as follows:

* indicates that these are dropped once they are defeated

Aversa herself drops a Goddess Icon upon defeating her.

It is best to approach this battle defensively and patiently; what the Deadlords lack in numbers, they make up twofold in strength. All of them boast extremely high stats, and their weapons possess incredible power. Of their weapons, only five can be obtained in this chapter (other legendary weapons can be obtained in the Infinite Regalia DLC chapter). It is highly recommended that you take the units with these items out as quickly as possible to prevent weapon usage as these weapons will be useful for the last few chapters.

Since the Deadlords are split into groups of four, it is wise to go for one group at a time. A good idea to keep in mind is placing a unit of extremely high Defense as far from either Bovis or Draco (the bowmen) while still being in their attack range so that they attack that unit. As soon as one of the Deadlords are able to attack, the others nearby will all begin to rush towards your playable units. Don't attack too many at once as they will work together to destroy the player's weakest units. Taking out one group of four at a time is a good strategy for keeping the playable units as safe as possible.

If you have any dark mages, you can use Mire (which can be obtained from the previous chapter or purchased from the SpotPass teams of Gharnef and Raydrik) to weaken a group before you engage them proper.

After turn 6, all passive enemies will begin rushing towards your nearest units, so make sure you're defensively positioned to deal with the remaining stragglers.