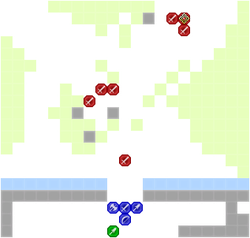 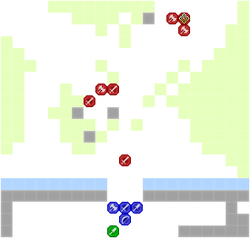 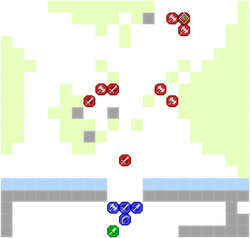 Chapter script
[view]
“Please forgive our intrusion. We wouldn't bother you were the situation not dire. We're being pursued by a group of bandits. I can only hope that you will be so kind as to lend your support.”
—Dimitri

An Inevitable Encounter is the prologue of Fire Emblem Three Houses.

A great war that consumed Fódlan over a thousand years ago between the Great Liberation King and the holy figure Seiros lead to a decisive victory for the latter. Hailed as a hero, she would go on to establish the Church of Seiros.

In the present, Byleth, a young mercenary, has been having dreams of a mysterious green-haired girl. Their father, Jeralt, the leader of a band of mercenaries is unsure of whom Byleth is seeing in their dreams. While they are preparing to depart to the Holy Kingdom of Faerghus, their lodging is approached by some individuals seeking help from bandits. Rushing to their aid, the bandits are nearly defeated, however, their leader prepares to assault one of them, forcing Byleth to intervene. However, just as they are about to take a mortal wound, time suddenly freezes. The green-haired girl, calling herself Sothis, has used her power to stop time and prevent Byleth's demise. By rewinding time, the scene replays with Byleth disarming Kostas and forcing him to flee.

Members of the Knights of Seiros arrive to assist in the rescue, but one of their leaders Alois is surprised that the bandits have already been dispatched. To his surprise, he sees Jeralt, his former captain for the Knights. Alois asks Jeralt to accompany him to Garreg Mach Monastery, much to his displeasure. The three youths, introducing themselves as Edelgard, Dimitri, and Claude, the future leaders of the three main nations of Fódlan, are impressed by their skill in the battle and use the traveling time to learn more about Byleth and hopefully sway them to provide their skills in service to their nations.

The battle is relatively straightforward as you will need you simply defeat Kostas. The enemies are weak and should not pose too much issue for your deployed four characters.

It is important to note that EXP from this fight will carry over into the future chapters. While you are given four characters immediately, you will not be using two of them for the rest of the playthrough. While it may be too early to decide for some, Byleth and one of the other three should secure the kills to maximize the EXP gained from defeating the bandits. Trading the two units' items to Byleth/the lord they will be working with is useful as if this is not done by the end of the chapter, those items are lost permanently. Jeralt will also be there as an NPC, but on normal, he will likely not be needed to complete the map. On higher difficulties, he can either help end the map in a pinch or soften the enemy so Byleth and your desired character can gain the experience they need. The three other characters can talk to Byleth, granting some support points between the two, thus use it to get an early start establishing Byleth's support with them.

The enemy has gotten a lot stronger while your units are at the same level with the same stats as usual. Enemy Ruffians equipped with swords now have seven Attack Speed, enabling them to double any unit equipped with an Axe or Lance, and the enemy has five movement. Despite this, it is possible to complete the chapter with just Byleth and the lord whose house the player is choosing to lead. Given that the player has four vulneraries at their disposal, any damage incurred can be quickly patched up, as long as they don't challenge too many bandits at once. The two lords that aren't being used for the rest of the game can trade their items to Byleth and the lord that is being used, and they can spend the rest of the chapter tanking damage and leading enemy units.

On the first turn weaken the enemy with Claude (or, if not using him, another unit who trades the bow from him), and then secure the kill with another unit. After that, the player can move slightly to the east to aggro the two bandits there, and then the three bandits on the left. Using the trees as cover can help reduce some damage taken. Combat arts are usually not necessary for killing these bandits, as they are killed in two attacks regardless of whether the attacks are normal or combat arts.

After this last set of bandits falls, Kostas attacks with his last two bandits. Jeralt also starts moving at this point, and heads towards Kostas' group. Jeralt can kill either of the ordinary bandits in two turns, but he cannot kill Kostas; if he deals damage that would normally be fatal, Kostas' health is reduced to one, instead. To maximize experience gains, try to kill the bandits before Jeralt can get to them, then kill Kostas last.