An Oasis of Magic

An Oasis of Magic 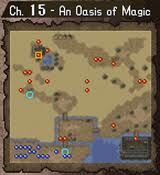 Chapter script
[view]
“Khadein, city of magic. Ever since Gharnef named himself ruler of this mecca for the magically inclined, the sands surrounding it had run red. Many knights had tried to oust Gharnef, but what defense did they have against the mages the fiend had bent to his purpose? One by one the heroes fell to blades unseen and fires within their armor; and it was not long at all before Khadein's wickedness outstripped its wisdom.”
—Opening Narration

An Oasis of Magic is Chapter 15 of the game Fire Emblem: Shadow Dragon.

Be aware that Gharnef is invulnerable to attacks in this chapter. Just ignore/avoid him; he will leave of his own accord at the start of Enemy Phase on Turn 6. Alternatively, block off the eastern bridge with your highest-resistance unit (Caeda is a good option for her Resistance, and her Speed will make her avoid Gharnef's attacks),  and augment them with a Barrier Staff or Pure Water to keep him at bay and heal the unit whenever he/she takes too much damage. Also, it is highly recommended that you bring as many magical classes and flying units as possible, as they are the only ground units that are not affected by desert terrain and flying units can fly over water and defeat other enemies while Gharnef is elsewhere. They are also the best candidates for defense from Gharnef.

Another strategy would be to use a Warp Staff to send a high HP unit, such as a general, to take out the enemy guarding the castle, and then warp Marth in to seize it (if you are unable to sustain yourself in a long battle). This does, however, prevent you from looting the building to the right.

One should note that the gate-guarding Bishop isn't considered the boss of this chapter; killing him will not halt further reinforcements. 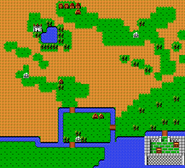