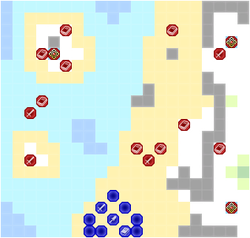 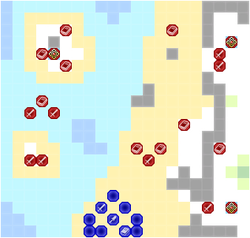 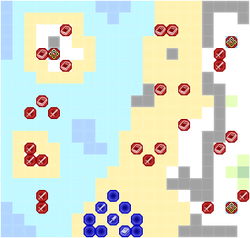 Chapter script
[view]
“Western Church extremists have taken over land sacred to Cichol, one of the Four Saints. Seteth heads out to rid the area of them, and Flayn insists on going along.”
—Opening Narration

An Ocean View is Seteth and Flayn's Paralogue Chapter in Fire Emblem: Three Houses. This chapter takes place at Rhodos Coast, and is available on all routes during White Clouds after completing Chapter 8.

Seteth is dispatched to deal with members of the Western Church who are causing trouble. Flayn wishes to join him since the place he's headed holds some significance to them both, but Seteth refuses because he won't be able to keep her safe. Flayn asks her professor and class to come along so that Seteth will not have to worry about having her on the battlefield. Seteth agrees that with the professor there, he can allow Flayn to accompany him.

This map is heavily based with Movement reduction. The mechanic is based on how many tiles you can move subtract by 50%(20% for Magic Users). This doesn't affect by fliers. This means if your unit can move 6 spaces on normal terrain, then they would move only 3 spaces. If the number is anything below it, they would move only 2 spaces. Mounted Units however, ignores terrain and would only move 2 spaces, even if they're dismounted. Seteth is a Wyvern Rider meaning he's weak to magic defenses. Keep in mind, Seteth won't gain any experience or weapon xp during the paralogue, because of Ally limitations, even if after he's recruited. Have Seteth weaken enemies and your units defeating them in process. Try not to attempt him to take out the Main Boss' Island due to large amount of Bishops, and may be defeated or survived with low HP.

Once the commander on the island is defeated, the remaining units will begin to flee toward tiles located where the player's units start.