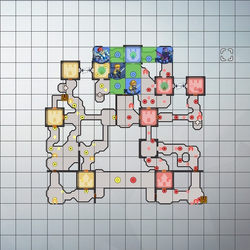 The Hoshidan and Nohrian armies, led by Rowan and Lianna, meet up, but the situation is tense. The twins rush to the battlefield to keep them from fighting, where they find Ryoma and Xander.

This chapter can be a pain if you are not sure what to do, so here is the best strategy. With your main lord, take every unit possible, and pair the NPCs with the playable units. Have 2 of your playable units seize the Hoshidan forts, and your 2 others seize the Nohrian forts. After you have done that, an Archer and a Cavalier will try to call in reinforcements. Don't waste your time trying to prevent reinforcements, just go to the bases when the gates open. However, if one of your teams have made it to one side's fort and the other team hasn't, wait for both of your teams to get at both forts, and then attack. This strategy is guaranteed to work. Just don't take too long, or Ryoma and/or Xander will kill each other, and the battle will be lost, resulting in Game Over.