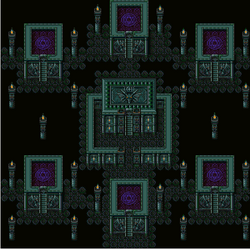 Chapter script
[view]
“It is true that Prince Leif has brought all the rebellious children of North Thracia together in one, organized revolt... But if we strike them down now, when they all act as one and their morale is at its highest, their spirits will be broken. And in my defense, the boy has done us a great service by defeating so many of House Friege's battalions. Without realizing it, he's eliminated one of the few military powers that could've threatened our rule. Besides, while he may be Leonster's heir, he's a mere child without enough holy blood to so much as lift the Gáe Bolg himself. He's a posturing rebel who's deluded himself into thinking he's a real prince. He cannot hope to triumph against me.”
—Veld to Manfroy about Leif's rebellion

An Undying Oath is Chapter 25 and the Final Chapter of Fire Emblem: Thracia 776. This chapter takes place in Manster.

This chapter can be either extremely easy, or a nightmare, depending on how you have prepared. Sleep staves, Warp Staves, Rewarp staves, Rescue staves, Tina's Unlock staff and Door Keys make this chapter a lot easier. The former for nullifying most threats on this map, the middle three for mobilizing your units and shuffling them from an undesired unit formation, and the latter two to allow you to enter the Deadlords' rooms. To breach Veld's chambers, you must capture the magic centers where the Deadlords are located.

For units, there is no question. Bring your strongest units, A-rank staff users, or any with Leadership stars, for extra hit and avoid to make the chapter more reliable, and the fatigue mechanic does not matter, as this is the final chapter.

First, Sleeping the Deadlords should be your priority. Canis can only be slept by use of the Blizzard tome (unless a unit capable of using a status staff has 14 or more magic, is under the effect of a Holy Water/Barrier Staff AND is standing on a magic floor - this unit will have at least 31 magic post-buff), where as most of the others can be slept by Sleep staves (Although, keep in mind they are on the Magic floor tiles). If you are able to remove any (Preferably Canis due to her Berserk Staff) on turn one reliably, you should try to remove them.

Players should be cautious when opening the doors, as the enemies in some are extremely powerful. If the Deadlords are asleep, all you have to do is have a unit with superior build capture them, then stand on their tile. When all 6 tiles have been stood on, Veld will appear in the center room. Since there is a spot where a two range unit can attack him from, you can just warp a two range unit to kill him, then Warp Leif to complete the game.