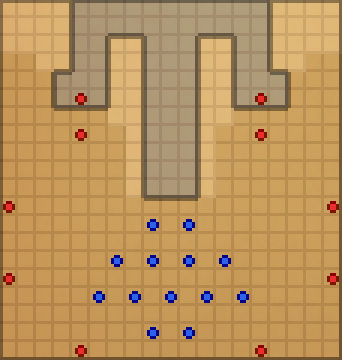 Chapter script
[view]
Anankos (透魔竜ハイドラ Tōrumaryū Haidora, Hydra the Invisible Demon Dragon in the Japanese version) is the 28th chapter and Endgame of the Revelation route in Fire Emblem Fates. The player may not save in this chapter, nor return to My Castle. This chapter takes place in Castle Valla Ruins.

This Endgame is extremely similar to the Endgame of Awakening. Although Anankos is the only initial enemy on the battle preparation screen, he will summon several Vallites onto the battlefield. Players must attack Anankos's arms (which are on the sides) and both must be destroyed. After that, Anankos's head can be attacked, which is in the middle of the field. Once the head is destroyed, all that remains of him is his eye (which still stays in the same place as the head).

Players should be aware that Anankos can hit very hard and his Dragonskin will reduce damage from your units' attacks. However, while Omega Yato still deals reduced damage due to Dragonskin, its damage is reduced by less than any other weapon: Omega Yato deals 0.75x damage against Anankos's Dragonskin, rather than the 0.5x damage that all other available weapons will do against it. Combined with its high Might, this makes Omega Yato an ideal weapon for fighting Anankos.

After the initial summoning of Vallites at the start of the battle, a trickle of 2 enemy reinforcements per turn will arrive until the end of the battle. If you've developed strong units, it may be fairly easy to pick them off as they spawn in, thus keeping their threat quite contained. In this case, you may have plenty of time and can consider using Corrin against both of the arms. However, if you are less confident with the strength of your forces, or simply wish to save time, you may consider splitting your forces in two groups to attack both arms simultaneously. By saving turns, you will reduce the amount of reinforcements that you will face throughout the chapter, reducing the likelihood of becoming overwhelmed by them.

It is also important that the head and arms are physical attackers and the eye is a magical attacker. High resistance units or units will Rally Resistance are highly recommended for Anankos's eye. Camilla's, Hinoka's, and Elise's personal skill auras may also help for boosting damage dealt to the eye while reducing damage taken.

Anankos's eye has a substantial avoid stat, on the order of 70 on Hard and Lunatic modes. Accuracy boosting skills or attack stance, or Gunter's personal skill in support of Corrin, may be helpful for ensuring hit rates against it.