View source
watch 23:03
'Fire Emblem: The Sacred Stones' - Chapter 4
Do you like this video?
Play Sound 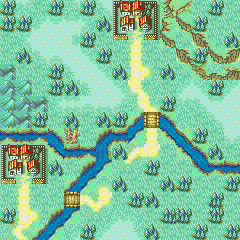 Artur (from start), Lute (from village)

Chapter script
[view]
“With her bracelet recovered, Eirika sets out with renewed determination. Passing through the ancient forest Za'ha brings them close to Grado's border. As they near the town of Serafew, Eirika's fears are assuaged by the lack of troops. But never-before-seen terrors crawl in the shadows of the trees.”
—Opening Narration

Ancient Horrors is Chapter 4 of Fire Emblem: The Sacred Stones. It is the first chapter in which the player encounters Monsters. Artur and Lute are recruitable in this chapter, Artur by default and Lute, if second village to the South-West is visited.

You can read the script here.

Like the last chapter, Ross should receive most of the attention. Although there are no walls in this level, meaning there is no place for Ross to hide, he should be safe as long as he is constantly healed and only dealing with one enemy at a time. Because Revenants have next to no defence, Ross, Colm, and Neimi can really shine here. Artur will be very useful on this level, and although his friend Lute may not have the advantage of using Light magic on dark enemies, she should also receive attention, unless the player thinks Ewan will be capable of being the sole Anima magic user.

If you do not like rushing down through enemies to get to Lute's village (if you go slowly it will be easier to give exp to Ross), then having Vanessa ferry a strong fighter (with high Defense and HP, preferably) down to recruit Lute, and then bring in another unit to reinforce the two (perhaps Artur, or another fighter if the player thinks Lute needs to be covered by two "wall-like" units). Lute's little party can move through the group of monsters up to rejoin the group, or move towards the Boss. The Boss doesn't have any range attack, so take advantage of this with anyone who you want to give experience to (Ross is ideal). It should be noted that Lute is recruited after the chapter ends, regardless of whether or not you visited her village.